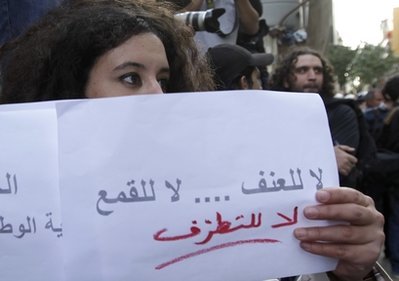 I wish we didn’t have to wait for unfortunate incidents to occur to handle the issue of foreign workers in Lebanon, but it seems Lebanese will never learn to be pro-active but only know how to react when something bad happens.

A 28 year old Lebanese woman is killed in a Christian monastery by a Syrian worker, and suddenly all hell breaks loose. To make things even worse, Lebanese TVs rather than creating powerful content that educates and informs audiences, cynically mirror and amplify the latent fear and loathing that lives in minds of many Lebanese.

I’ve already posted few days ago that we should not take Myriam’s murder out of its context, as it was an individual crime perpetrated by a deranged human being, and that there’s nothing we could have done to prevent this crime, even if monasteries and religious Christian institutions had followed Patriarch Rai’s advice today not to entrust their protection to non-Christian foreigners or house them in a bid to preserve their sanctity.

Nevertheless, this should not stop the Lebanese authorities from regulating foreign labor, mainly the Syrian workers, because it’s unacceptable that they remain without any legal status and can go in and out of the country as they wish, and depending on the political situation. It is unfair for both Lebanese and Syrians and non-Syrian foreign workers, and the proof is how some people are reacting to Myriam Al Ashkar’s crime by spreading hatred against Syrians. Added to that, him being a Syrian Intelligence officer is another reason for the Lebanese authorities to regulate illegal entries to Lebanon, and raises many questions as to what is he doing in a monastery in the heart of Keserwan? Did we forget the practices of our loving neighborly country? Who employed this man without checking out on him?

It’s not by hanging the killer that we will resolve our issues or enhance security, neither by racial profiling and mistreating foreign workers. What needs to be done is to regulate foreign labor, fight racism and spread awareness and trust me it’s not that hard.

One last thing, I urge our ISF and army to take better security measures by organizing patrols around the clock to make people feel a bit more safe. Empowering municipalities with patrol cars and guns is also an efficient way to prevent crimes.