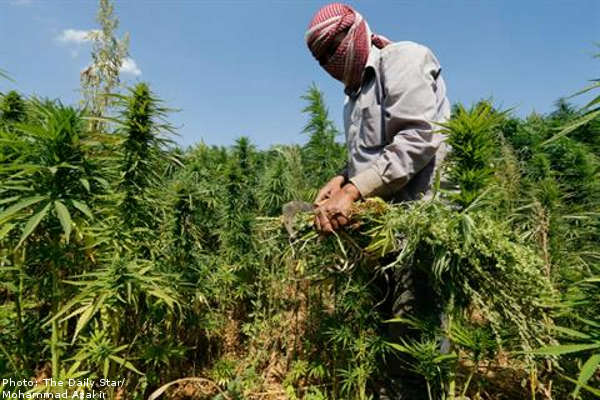 Picture From The Daily Star

Lebanon’s former Tourism Fadi Abboud called for the “legalization of the cultivation of marijuana, and the authorization of its use for medical purposes and exportation” a couple of weeks back and LBCI’s TV host Dima Sadek tweeted in favor of cultivating marijuana few days ago. Even Al-Akhbar newspaper back in September asked on their front page to legalize weed as it’s the only source of income for a lot of Lebanese families.

I’ve already posted about this matter last year and said that while I have nothing against legalizing it, we need a proper plan to start the cultivation and let the government profit from it to close the debt and not gangs and armed groups. Honestly speaking, I don’t see how this can be done in our current state and I really wish someone proposes a viable plan and present it (Why didn’t Abboud propose this while he was still minister?). One of the readers suggested that the authorities strike a deal with the families growing marijuana so that both parties could benefit, but this is just to good to be true, specially when marijuana trade is thriving with or without the government’s approval and the areas where it’s being grown are out of the state’s control.

On a positive note, I am glad the marijuana issue is being brought up to the public as there’s a lot of misconception around it and I noticed a lot of people still associate it with hard-core drugs which is totally wrong.