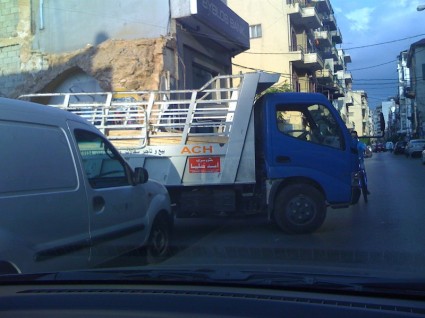 Driving in Gemmayze at night is quite safe considering there’s traffic all the time. As far as driving in day light is concerned, it feels more like playing some video game where you have to pass the whole street and skip obstacles left and right.

I had to stop in the picture above as a truck decided all of a sudden that it needed to park at a specific spot. While it was still backing up, an idiot riding a bicycle decides it’s safe to pass in front of it and almost hit his face with the truck’s mirror. Another idiot on a motorcycle came from my right at full speed and almost hit the bicycle guy and the truck’s mirror.

And then they wonder why accidents are increasing.

No one is going to stop the accidents from increasing in Lebanon, not until the Lebanese understand they don’t own every road they drive on.

PS: I should have opened my window and yelled at them: Chi Marra cheyfeen rass 2istina3e? 7atto el casque! (Refering to kunhadi’s ad) 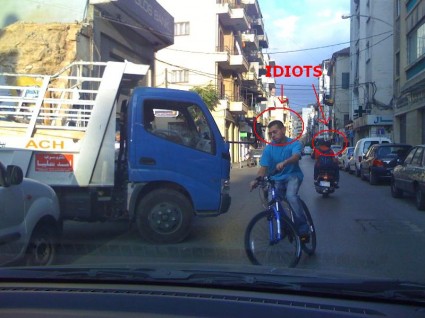