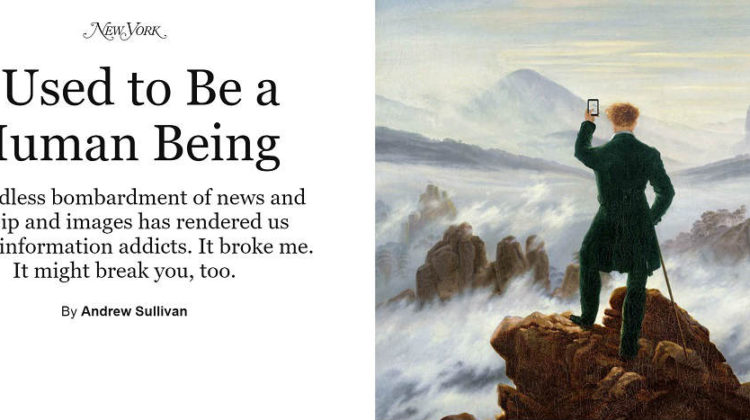 This is a very long article but a very insightful one that I recommend you read. It makes you rethink the world around you and more specifically the online bubble that we are living in. The article is entitled “I Used to Be a Human Being: An endless bombardment of news and gossip and images has rendered us manic information addicts. It broke me. It might break you, too.”

Here are few excerpts but I recommend you read the whole thing [here].

I was, in other words, a very early adopter of what we might now call living-in-the-web. And as the years went by, I realized I was no longer alone. Facebook soon gave everyone the equivalent of their own blog and their own audience. More and more people got a smartphone — connecting them instantly to a deluge of febrile content, forcing them to cull and absorb and assimilate the online torrent as relentlessly as I had once. Twitter emerged as a form of instant blogging of microthoughts. I remember when I decided to raise the ante on my blog in 2007 and update every half-hour or so, and my editor looked at me as if I were insane. But the insanity was now banality; the once-unimaginable pace of the professional blogger was now the default for everyone.

If you had to reinvent yourself as a writer in the internet age, I reassured myself, then I was ahead of the curve. The problem was that I hadn’t been able to reinvent myself as a human being.

By the last few months, I realized I had been engaging — like most addicts — in a form of denial. I’d long treated my online life as a supplement to my real life, an add-on, as it were. Yes, I spent many hours communicating with others as a disembodied voice, but my real life and body were still here. But then I began to realize, as my health and happiness deteriorated, that this was not a both-and kind of situation. It was either-or. Every hour I spent online was not spent in the physical world. Every minute I was engrossed in a virtual interaction I was not involved in a human encounter. Every second absorbed in some trivia was a second less for any form of reflection, or calm, or spirituality. “Multitasking” was a mirage. This was a zero-sum question. I either lived as a voice online or I lived as a human being in the world that humans had lived in since the beginning of time.