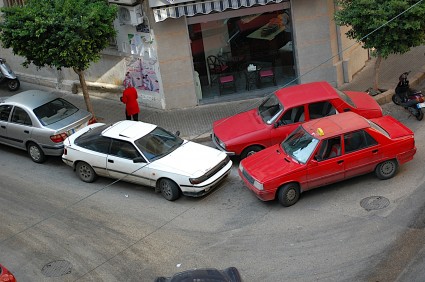 I wanted to comment on this article a week ago but I wrote a draft and forgot to publish. Nevertheless, I still insist on posting it because I believe it is a very important and sensitive issue.

Imad Atallah from the Daily star wrote an article on how he scanned and photoshopped legal parking stubs from the park meter and replaced them with new expiration dates, without getting caught. This experiment for him proves the prevalence of the rig â€˜n rob syndrome in the country among all government institutions and politicians.

Having said that, I strongly believe that what Imad was not only wrong but very destructive and pointless. He has indirectly shown people a new way of tricking the system without getting caught and has shown himself as a bad example for others to follow, knowing that many many Lebanese read the Daily Star everyday. If there are few decent Lebanese citizens left out there, they should show themselves as responsible and abide by the law, not twist it to prove how bad the system is. The crime Imad committed was against his own belief rather than against the Lebanese system. What’s next? Stealing a car and going to Brital and getting away with it?

What he should have done and what should have been both ethical and appropriate to do is to cheat for one day, then report this as a responsible Lebanese citizen to the park meter company, which is a private one if I am not mistaken, even though working for the Lebanese government, and post about it later to force them to do something about this flaw in the system.

Speaking of the system, I don’t believe you could have gotten away everyday for a year since the meter men rotate every now and then and you would have been caught at one point. [Article]

PS: Hope that answers your questions Mustapha as well!