It is great to see so many people joining the protest against the tuition increase and I hope we will see protests in other universities because the same thing is happening there too. A 37% increase in four years (If what the students are saying is true) is unacceptable.

Hundreds of students at the American University of Beirut turned out Thursday to protest a planned tuition hike scheduled to take effect next year.

Students rallied in front of College Hall chanting ‘We won’t pay!’ into microphones as they hoisted colorful signs featuring slogans both serious and playful.

“Our wallets strip for AUB” read one sign in a tongue-in-cheek reference to the recent viral campaign to support Lebanese Olympic skier Jackie Chamoun.

Others read “Raise cost, we raise hell!” “Students sentenced to debt,” and “Show me the money.”

“Over the years, the university has been increasing the tuition with no evidence of why they need it,” said Youssef Samdakil, a third-year mechanical engineering student and one of the protest organizers. Samdakil is also a member of the University Student Faculty Committee’s Tuition Increase Committee, which organized the protest. [DailyStar] 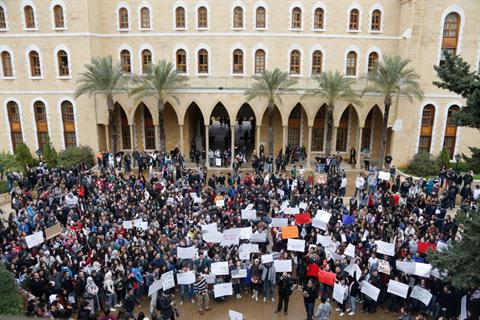 See Also:Beirut Marathon Officially One Of The 26 Exclusive Silver Races In The World!
Posted By Najib
Categories BEIRUT,INFORMATION,LEBANON