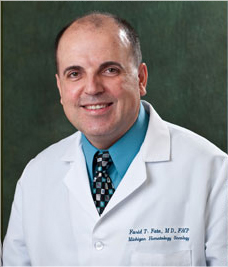 Dr. Fata is due in court Tuesday and his bond has been set at $170,000. If convicted, he might face up to 20 years in jail. Having said that, I don’t think 20 years will be enough to repair the damage he’s done in the past two years.

I mean seriously! What the hell was going through this guy’s mind to do that?

Here are few excerpts from Medscape.com (Thanks Nicole)

“This oncologist and other employees also reported that Dr. Fata ordered intravenous immunoglobulin (IVIG) for patients whose antibody levels did not warrant the therapy. One nurse practitioner (NP) told federal agents that she pulled the charts for 40 patients scheduled for IVIG therapy and saw that 38 had neither low antibody levels nor a recurrent infection, which is another indication for the treatment. The NP consulted 2 other employees about the issue, and the 3 of them canceled the IVIG therapy for the 38 patients.

Dr. Fata’s employees had internally challenged other practices they considered unethical, such as fabricating cancer diagnoses in patient records to justify insurance claims for chemotherapy and positron emission tomography (PET) scans, according to interviews conducted by federal agents. Some employees quit over these issues. The employed oncologist, who had considered quitting, described working with Dr. Fata as “living with this hell.”

Dr. Fata has not yet had his day in court to refute these charges. “He vehemently denies all the allegations,” said Christopher Andreoff, the physician’s attorney, in an interview with Medscape Medical News.

“The current and former employees paint a picture of a physician who was obsessed with administering chemotherapy, no matter the circumstances. “A male patient fell down and hit his head when he came to MHO,” the complaint alleged. “Dr. Fata directed [an NP] that he must receive his chemotherapy before he could be taken to the emergency room.” Dr. Fata’s order was carried out. The man eventually died from the head injury.” [Medscape.com]

A Detroit-area doctor has been charged with bilking the government of tens of millions of dollars by deliberately misdiagnosing patients with cancer and illegally billing Medicare for the treatment.

Dr. Farid Fata will remain behind bars until at least Tuesday as a third federal judge considers whether or not to grant him bail. He was arrested last week on charges he ripped off Medicare for millions of dollars by giving chemotherapy to patients who didn’t need it and diagnosing cancer when the illness wasn’t apparent, MyFoxDetroit.com reported.

Fata earned about $24.3 million in drug infusion billings directly to Medicare, “more than any hematologist/oncologist in the state of Michigan during that time period,” FBI agent Brian Fairweather wrote in the criminal complaint.

A magistrate judge had said Fata could be released from jail under strict conditions, but prosecutors appealed. They fear Fata will flee to his native Lebanon if released from jail, claiming he has access to millions of dollars to finance a flight. [Fox News]