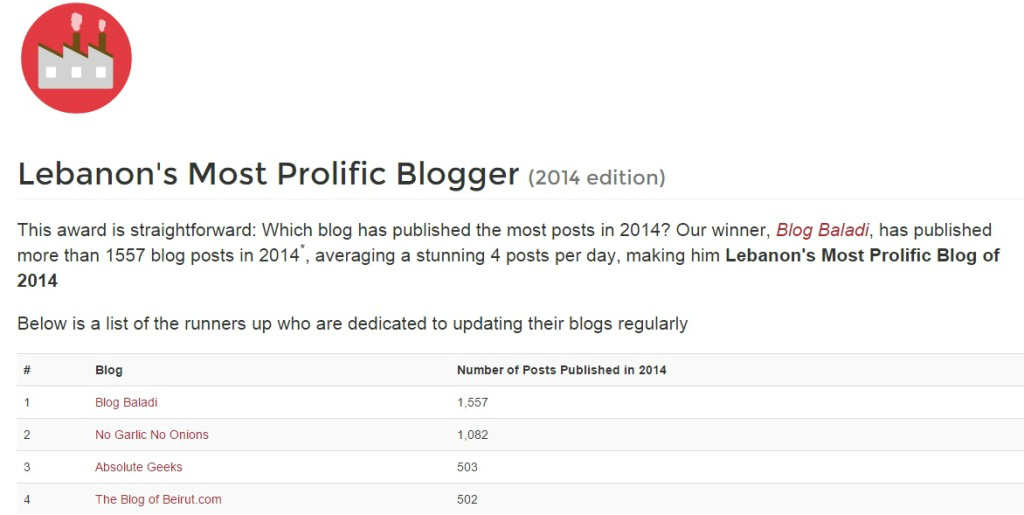 My favorite Lebanese aggregator [LebaneseBlogs] just released its stats for 2014 and sorted them into five different top lists:

BlogBaladi was featured in three of five categories and I got named Lebanon’s most prolific blogger with over 1500 posts last year. The blog also got an honorary mention as the one with the highest number of #1 posts in 2014. The great thing about these lists is that they are based on hard data and you could learn a lot from them. For instance, even though I got the highest number of #1 posts (not sure how many), the blog’s virality percentage is around 22% probably because I tend to post a lot and within minutes. Similarly, I’ve always underestimated Facebook’s importance until mid this year and started investing more time on it.

All in all, it’s very hard to compare blogs between each other but these stats are the closest thing we have to an objective review so I will make use of them to improve things and wipe all the awards next year hopefully 😀

Check out all the lists [Here].

Thanks Mustapha for the effort and honorary mention and congrats for all the winners!

Lebanese Blogs 2016 Year in Review: BlogBaladi Among The ...

BlogBaladi Has a New Look! ...