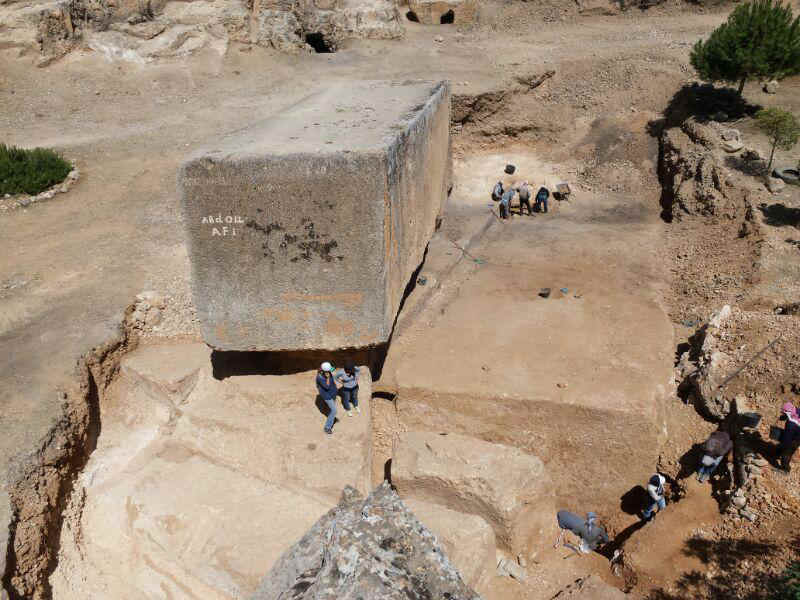 German Archeologists made an incredible discovery a month ago in Baalbeck when they found right next to the “Hajar Al Hibla” in Baalbeck, the world’s biggest ancient stone block. The stone is more than 20 meters long, weighs more than 1.5 tons and nobody knows yet who ordered a 3 million pound megalith to be delivered to Baalbeck or why it got abandoned.

The New Yorker dug deeper into this matter and mentioned few theories that could explain the size of that stone as well as some historical facts about Baalbeck, which is named for Baal, the Phoenician deity, although the Romans referred to the the site by its Greek name, Heliopolis. It’s quite sad though that the article ended on a negative note by mentioning the tensions between Syrian militants, Lebanese Sunni and Hezbollah in Baalbeck and its outskirts.

Testimony to Baalbek’s flummoxing properties can be found in the 1860 diary of the Scottish traveller David Urquhart, whose mental capacities were “paralyzed” by “the impossibility of any solution.” Urquhart devotes several pages to the “riddles” posed by the giant stones—“so enormous, as to shut out every other thought, and yet to fill the mind only with trouble.” What, for example, was the point of cutting such enormous rocks? And why do it out there in the middle of nowhere, instead of in a capital or a port? Why were there no other sites that looked like Baalbek? And why had the work been abandoned midway? Urquhart concludes that the temple must have been built by contemporaries of Noah, using the same technological prowess that enabled the construction of the ark. Work was halted because of the flood, which swept away all the similar sites, leaving the enigma of Baalbek alone on the face of the earth.

Scholars today like to laugh at Urquhart, particularly at his alleged belief that mastodons transported the stones. (I didn’t see any reference to mastodons in his diary.) But archaeologists are still trying to solve the riddles that he posed. Margarete van Ess, a professor from the German Archaeological Institute, told me that the purpose of the investigation that turned up the new stone block was precisely to ascertain how the three temple blocks were transported, and why two others like them were left in the quarry. (One of these previously discovered megaliths, known as the Hajjar al-Hibla, or Stone of the Pregnant Woman, turned out to have a crack that would have impeded its transport.)

Van Ess added that the blocks were probably cut in much the same way as the masonry used in the Pont du Gard, a Roman aqueduct in southern France, with each piece split from a larger expanse of limestone along natural fissures between the rock strata. Too heavy to lift, the blocks would then have been dragged from the quarry, probably using a capstan, a kind of human-driven winch—though the possibility of a sledge is also under discussion.