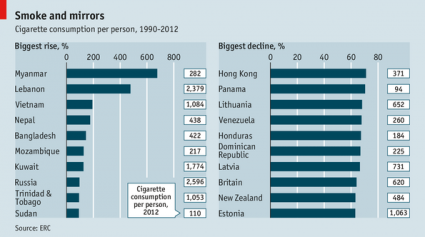 I think we will easily top that list if Shishas were also included not just cigarettes. Hopefully after seeing these statistics, the government and more specifically the Ministry of Tourism, will consider allocating more money to enhancing and implementing Law 174.

The simplest thing that can be done is raising the ridiculously low cigarette prices in Lebanon.

Together, China’s 1.3 billion citizens plough through more packets than anywhere else. The average Chinese person smoked 30% more in 2012 than in 1990, ranking the country 11th by consumption per head. Lebanon and Myanmar saw even more dramatic growth (though a shift from illicit to official sales somewhat distorts those trends). [Economist]