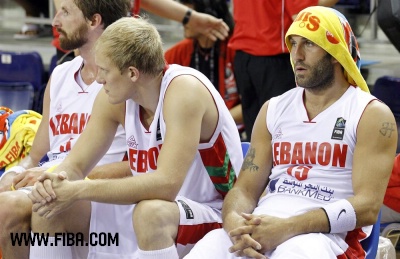 The Lebanese National Basketball team continued its humiliating streak and lost to Spain by 34 points (91-57) tonight and is therefore out of the world championships that are being held in Turkey. Spain is a very strong team and the world champion, but the Spaniards weren’t at their best at all since the start of the tournament and lost two games already.

Why did Lebanon lose by that much?

Simple. Same Shitty tactics, same shitty plays, same shitty coach. We had no inside game and no centers to defend ourselves and as a result the top two scorers of the Spanish team were unsurprisingly its centers, with Mark Gasol scoring 25 points and Fran VAZQUEZ scoring another 15 points.

Jackson Vroman (the Lebanese player??) has been the most consistent so far in this tournament. Fadi el Khatib only played well in one game and was neutralized in the other games. Rony Fahed, Elie Rustom and Ali Mahmoud played hard and were the real asset of this team. Matt Freije played like crap, probably because he was not fit enough as he picked up an injury before the championships and the rest of the Lebanese players were practically in lalaland.

Of course let’s not forget our coach who cost us over 100,000$ and humiliated the Lebanese basketball team like never before. Maybe the Lebanese Basketball Federation should start using its brains and investing money in young talents instead of spending money on naturalizing foreign players and getting foreign coaches.

A very sad ending to what was supposed to be our most promising championships.