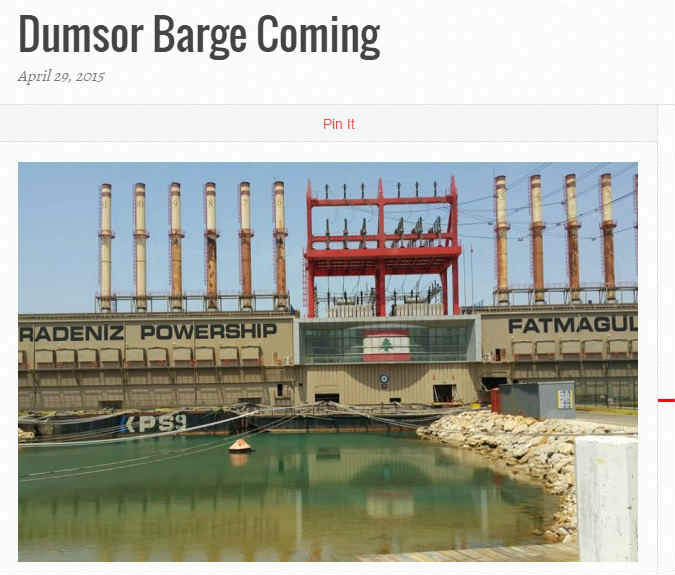 The above screenshot is taken from the front page of the DailyGuideGhana and shows a picture of the Turkish power ship Fatmagul currently docked near the Zouk Power plant in Lebanon. Apparently Ghana has an electricity crisis and its Power Minister is seeking help from Turkey through emergency power barges.

I think it’s funny that the ship looks Lebanese because of the flag and that some people might think we are able to provide electricity to other countries. I just hope that Fatmagul won’t suffer from electricity blackouts just like it did in Lebanon! If it does, we will gladly send other some generator owners from Zahle since they are unemployed at the moment 😀

Some selected Ghanaian journalists have been touring Lebanon to see the power ship built by Karpowership of Turkey at the cost of $700 million. The trip, which will take them to Istanbul in Turkey, is being sponsored by the manufacturing company. Karpowership is the same company constructing the power barge for the Electricity Company of Ghana (ECG). But the company says it is not an emergency power barge because it is not part of the programme.

The Power Minister, Dr Kwabena Donkor, had told journalists early this year that emergency power barges were expected from Turkey to cushion the crisis that is running down businesses and causing deaths. Mr O’Driscoll said the Karpowership has a power purchase agreement with the Electricity Company of Ghana and is working within the time frame of the pact. The ECG signed the 10-year power deal with the Turkish company last year to deliver 450 megawatts of power to boost the ailing power sector which appears to defy all solutions. The barges are to bridge the gap of Ghana’s energy needs and bring to an end the power crisis which has come to be known and accepted as dumsor-dumsor.