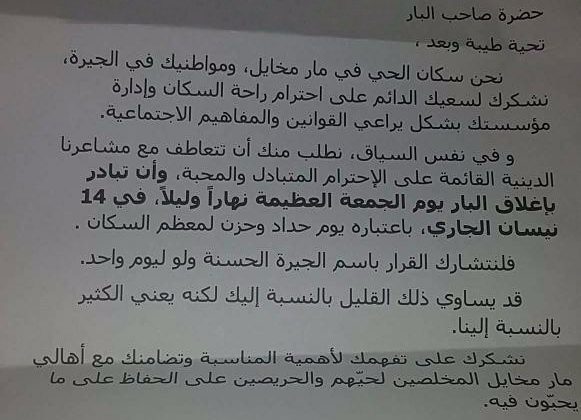 Several bars and pubs in Mar Mikhael received a flyer asking them in a polite way to close down on Good Friday. Unlike the threatening memos that are sometimes distributed during Ramadan by fanatic groups and directed at those who do not observe fasting, the memo signed by the Mar Mikhael locals and residents is a friendly one, and could be easily ignored by pub & bar owners.

Gino brought the issue up few days ago, and pointed out that the memo may be polite and non-condescending but the idea behind it is wrong and “the fact that it only targets pubs, is also weird, sending a message that it’s not about taking a day off to celebrate Easter and Good Friday, but targeting nightlife which the authors of this flyer feel is “disrespectful” to their beliefs”.

I’ve followed some of the exchanges on the post and even though I’m not a fan of such memos or religious talks in the first place, I disagree with Gino on several points and I believe that he over-analyzed the whole thing and took it out of proportion.

Here’s my two cents on these flyers:

– Mar Mikhael residents probably targeted pubs and bars only not because they have a thing against nightlife, but because they cause more disturbance and nuisance than Arguile places and restaurants. Nevertheless, the flyer should have been addressed to all out of principle.

– Mar Mikhael residents have to put up with drunk and loud people, traffic, loud music all year long and this was imposed on them because of the government’s and Beirut’s municipality’s lack of planning and incompetence. Mar Mikhael & Gemmayze are both residential streets first and foremost, and what’s happening there is abnormal and a nightmare for the residents. I’m actually surprised they are still being polite and courteous about this whole fiasco, whether it’s restaurants, pubs or bars.

– There’s no alarming trend targeting nightlife in Lebanon behind this flyer. Whether it’s Monot, Gemmayze, Hamra or Mar Mikhael, residents and pubs never really got along. The blame is once again on the authorities and municipalities who never bothered to organize this whole fiasco.

– There are restrictions on nightlife venues in several developed and “non-religious” countries when it comes to Good Friday and other religious holidays. Good Friday is an official holiday in Lebanon so residents could legally ask everyone to close down if I’m not mistaken.

– Clashing with residents or locals over a polite memo is probably the worst thing to do. Life is all about giving and taking especially in a diverse society like ours, and being extreme (whether religious or not) is destructive and harmful for all.

– Lebanon may be a secular country according to the constitution, but the majority is still religious and relatively conservative and I see no harm in respecting religious holidays and traditions, especially if it’s for just one day. To put it in simpler terms, I’m totally against someone asking me as a Christian to fast during Ramadan out of respect, but I wouldn’t go around eating in front of him just to make a point.

All in all, the memo should have been addressed to all not just pubs, but I don’t see it as imposing beliefs on others or a conspiracy against atheist or Lebanon’s nightlife. If you’re gonna go party tonight with these ideas in mind, I recommend you start drinking (or smoking) home to get in the right mood 😛