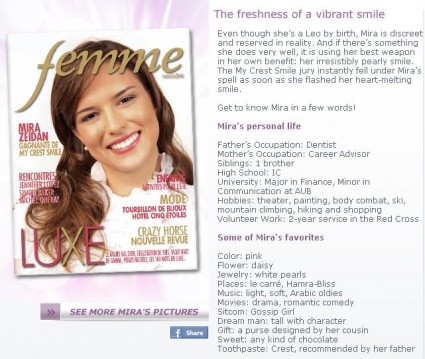 As you all remember, there was a Crest Smile competition going on two months ago whereas girls would submit their photos on Crest website and people would vote for them so that they get a chance to feature in Femme magazine. Back then we supported for fun a candidate trying to send out a message that Maya illustrated so well.

Rima Zeidan won the competition and apparently stopped smiling after she read my post that this competition looks fixed.

“Yes it is surprising, and yeah maybe a coincidence.
But I just want you to take a good look at the picture and be the judge youself, use your objectivity.
Donâ€™t blame everything on Wastaâ€¦ you may not beleive it, coming from the winner herself, BUT if there is one person in Lebanon who is against wasta, then it is me. I can assure you that the competition was a very objective one and we had to go through several phases before the decision was made and the winner announcedâ€¦
Soâ€¦yeahâ€¦The winner may not be who you wanted it to be, but donâ€™t just always hide behind wasta because the degree of professionalism if the CREST and FEMME team was exceptional! 🙂
KEEP SMILING”

My Dearest Mira,
1- Alf Mabrouk for you and you sure have great white teeth and deserve to win, but that’s not the point we were trying to send out. We were voting for a cartoon character with 3 teeth and the girl with the red hat that was not even smiling in case you did not notice.
2- Rules of the competition were based on voting yet as i said before, i never saw your picture among the 20 most popular images. Why are they deceiving people into voting if they count for nothing?
3- Unfortunately, you cannot assure me of any competition’s subjectivity, at least not in Lebanon. I do want to believe you but there is no way you are aware of everything that’s been going on behind the curtains.
4- I hope you will get a good job based on your diplomas (Major in Finance, Minor in Communication at AUB) and merit and not because you won the Crest Smile. That would be demeaning to you as a person.

Keep smiling and good luck and hope to see you around.

See Also:Racism at an AntiRacism Event in Lebanon
Posted By Najib
Categories CRITIQUES,LEBANON