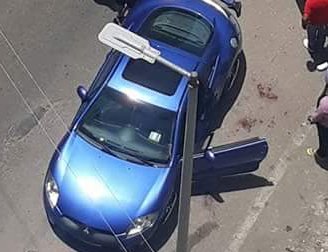 I have no idea if the recent tensions in Tripoli led the ISF to fire at the driver instead of the car, but killing a man for failing to stop at a checkpoint is quite unfortunate and f*cked up. The ISF member who shot at Nazih Toufik Hammoud was arrested and investigations are underway, but that won’t change the fact that the father of four is dead now. As far as I know, ISF officers should fire in the air first if a car doesn’t comply and then fire at the car but killing the driver should only take place if he’s posing a threat or trying to run them over.

I saw a video being circulated on Twitter where the man is stepping down from the car and taking few steps before falling on the ground but I’d rather not share it here. I even removed the body from the above picture out of respect for his family. It’s too late to ask ourselves why Nazih fled the checkpoint now, but at worst they would fined him or confiscated his car if arrested.