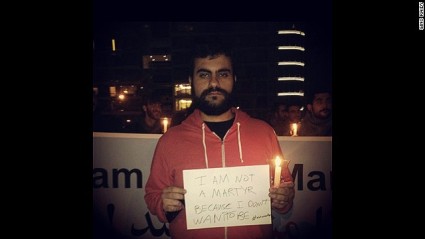 The #NotAMartyr campaign was started following the unfortunate death of 16 year old Mohammad Chaar who was taking a selfie with some friends when the car behind them exploded. The bombing was targeted against ex-Minister Mohammad Chata7 who unfortunately died along with 5 other people.

The #NotAMartyr campaign spread quickly and the latest mention was in an article by CNN International Correspondent Mohammed Jamjoom, whom I had the chance to meet once during the I Am Not A Tourist event at Biel.

Beirut, Lebanon (CNN) — Mohammad Chaar wasn’t looking to become a martyr — or a victim. Late last month, the 16-year-old student was just hanging out with his friends in downtown Beirut, out of school and having fun. They all took a selfie to mark the moment, and never expected that moment would become so momentous.
The car bombing targeted and killed Mohamad Chatah, a former Lebanese Ambassador to the United States — but several others also lost their lives.
Minutes after the blast, Chaar appeared in another picture. In it, he’s seen lying unconscious and bleeding on the pavement. He would die later from his wounds.
As is the custom in Lebanon, hardly any time had passed before Chaar, an innocent bystander, had been branded a far weightier title. All of a sudden, “victim” had morphed into “martyr.”