I’ve been wanting to post about the Ghost nightclub incident for a couple of days now but I took some time to read everything that’s been said online and in the media as well as watch Joe Maalouf’s “Enta 7orr” show to see if he has more information to share on this matter.

To begin with, let me just state that I am personally against the practices of Mayor Chakhtoura and for abolishing Article 534 of the Penal Code, which states that “sexual intercourse contrary to nature is punishable for up to 1 year in prison”, because it is a clear violation of the Human Rights. In fact, “criminalization of homosexuality is a crime without a victim, in addition to its contradiction with principles enshrined in the Universal Declaration of Human Rights, the International Covenant on Civil and Political Rights, the International Covenant on Economic, Social, and Cultural Rights, and other conventions”. However, this whole issue is being tackled the wrong way in my opinion and in a way that will only benefit Dekwaneh’s Mayor Antoine Chakhtoura.

In fact, if you follow closely the details of the story, you will realize that Chakhoura, who happens to be a lawyer, is trying to cover up his illegal practices, whether in terms of arrest or abuse, by highlighting the fact that the victims were homosexuals or transvestites, and Marwan Charbel’s statement yesterday played in his favor. Even though some might argue that the law is vague and does not specify a relationship between two men to be illegal, the types of unnatural sexual relationships are specified somewhere in the laws or official documents from what I understood. There’s been one case where a judge in Batroun refuted Article 534 but his decision could have been legally challenged. That’s why the only way to fight this is by asking to abolish Article 534.

Arousing the religious feeling in the area was another weapon Chakhtoura used, and this is noticeable through the banners I spotted in Dekwaneh and on Facebook: 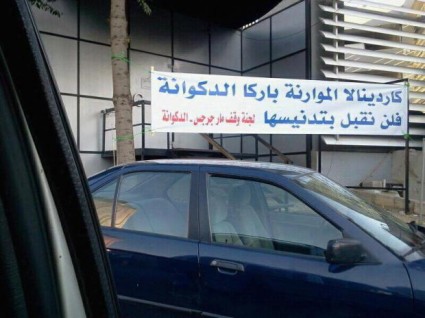 Before going any further, I took some time to watch the whole episode of Enta 7orr and found Maalouf’s guest, Dr. Elie Abou Aoun spot on in his analysis and comments and partially agreeing with what I said above. However, I noticed some contradictions in the testimonies being given and few weak arguments presented by Maalouf that I wished if he had elaborated on further. For example:

– (Minute 1:39 Till 7:04): Maalouf called Rabih Dagher, Ghost’s owner, who denied the original story that the municipal police raided the night club and arrested four and said the mayor only came to visit him that night and then left. I don’t know whether he’s too scared to admit what happened or he left the club early but something’s not right here.

– Maalouf mentioned that under Article 74, Chakhtoura was not allowed to arrest these people or interrogate them but based on Abou Aoun’s comment and my knowledge, the municipal police is allowed to arrest people under the pretext of violating “el 2adeb el 3ame”, which means in case it spots an indecent behavior, whether it’s a heterosexual couple having sex in the car, a guy running bare naked in the street or two homosexuals kissing. The problem is here that there’s no clear definition of what constitutes an indecent behavior, the same way the Lebanese Law does not define what an “unnatural sexual act” is. I am asking a legal expert to confirm this but I am confident the municipal police can interrogate and arrest people under certain circumstances.

– (Minute 16:35): Maalouf calls an employee named Ziad who works at Ghost and he states that Ghost was not just for homosexuals but for straight people too. I wish if Joe had elaborated further on the possibility of opening gay-friendly pubs in Lebanon and whether the owner can get any protection from people like Chakhtoura from the local authorities (From the police for ex) in that case? If it is doable, then we’d avoid another Ghost-like scandal.

– Why were drugs and criminal activities in Dekwaneh brought up into this episode? And why are we making a big fuss out of video pokers and amusement centers? The Taxi driver being interviewed said Dekwaneh had turned into “Las Vegas” as if it’s a bad thing. That was unnecessary in my opinion, knowing that Chakhtoura almost got killed a year ago after a campaign he launched to clean his city of drug dealers.

Don’t get me wrong, I applaud Maalouf for the investigations he does, and I think his show has a great potential, but I wish if he had focused on the legal matters and facts that interest us more and that would help us come out with a convincing conclusion because mixing the Ghost night club scandal with the “protected” criminals of Dekwaneh and its surrounding is not valid here, and the Casinos (if we can call them that way) story is irrelevant.

Speaking of legal matters and to get back to the main point I raised earlier that Dr. Elie Abou Aoun explained so well, we should all be concerned about what Chakhtoura did and not just the Lebanese homosexual community, because what he did is a clear violation of the Lebanese Law, basic human rights and international conventions that Lebanon is committed to respecting and implementing, as well as a breach of the basic arrest and interrogation guidelines set by the Lebanese state. This is where our main focus should be in order not to turn this into a pro or anti-gay rights campaign where the public opinion will (unfortunately) favor Chakhtoura no questions asked and the story will die out in a matter of weeks if not days.

On top of all that, some are saying that Ghost has been open for almost 5 years now and question the timing of Chaktoura’s illegal actions, which leaves me wondering if this isn’t a classic case of a deal gone wrong between the two parties in question, because Ghost’s owner was denying all the facts on TV. In regards to Interior Minister Marwan Charbel’s last statement, the only thing I have to say is that we need Ziad Baroud back ASAP.

On a last note, there’s a fact that’s quite interesting that was pointed out to me by a friend of mine. Article 534 was derived from French legislation during the so-called French “mandate” on Lebanon where we didn’t have yet a constitutional council in Lebanon, which was founded in order to “supervise the constitutionality of laws and to arbitrate conflicts that arise from parliamentary and presidential elections”. This being said, we should push to have all these archaic laws similar to Article 534 of the Penal Code revised by this council and abolished if not conforming with the international conventions that Lebanon is bound to respect.