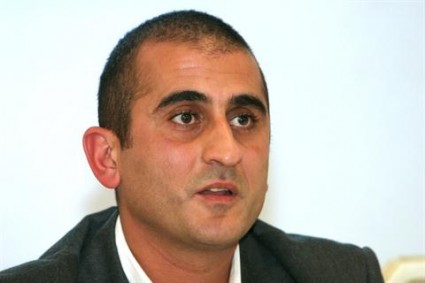 Pierre Hashash was intercepted two days ago by plain-clothed army intelligence and beaten with rifles on his head in broad daylight outside Dunkin Donuts in Batroun. He was taken to Batroun’s serail then to Qobbeh prison in Tripoli where he’s being held as we speak. For those of you who don’t know Pierre, he’s an artist and a controversial figure who runs for parliament using sarcastic slogans and banners.

The reasons for which he was detained are still not clear, as some are saying it’s because of insults against the Lebanese Army and its chief that he posted on Facebook, while others are saying his arrest was due to a personal dispute with an army officer. In both cases, the way he was beaten up is unacceptable and unnecessary. As for the legal aspect of his arrest, some are arguing that it’s illegal while the army is saying there are several legal cases against him.

This being said, I find it surprising that the army would behave that way a day before the Independence specially that their slogan for this year’s Independence celebration was “Jayebli Salam” (English: Bringing peace). I also find it hard to believe Army chief Kahwaji would allow such a thing on the eve of a ceremony that he’s been working on personally. It could be a personal dispute like some media sources suggested, but that doesn’t justify one single bit the method used to apprehend Pierre.

So until things are cleared out, I honestly believe everyone should calm down and stop taking shots at the army and its head, because it will only make things worse. Pierre has a lawyer taking care of his case and hopefully some politicians or high-officials have already done their calls to settle this case once and for all.