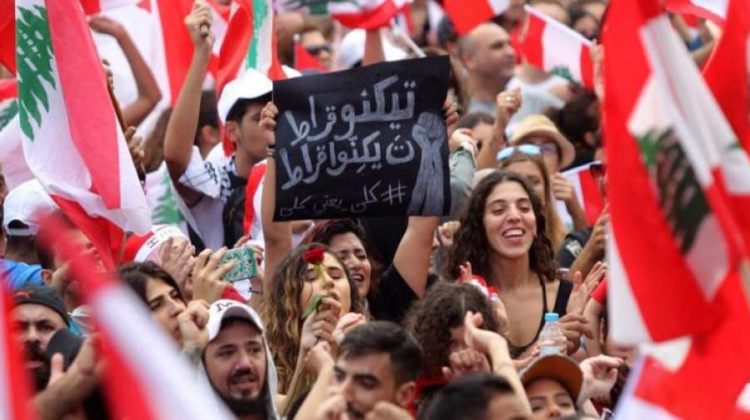 Is it ok to swear at politicians? Is profanity allowed when addressing ruling parties that have made our lives miserable for the past 30 years and more? Why is it ok for them to swear but ordinary Lebanese with real problems can’t?

If we were to resort to the Lebanese penal code, it clearly “criminalizes defamation against public officials and authorizes imprisonment for up to one year in such cases. It also authorizes imprisonment for up to two years for insulting the president, flag, or national emblem. The military code of justice prohibits insulting the flag or army, an offense punishable by up to three years in prison. Other laws outlaw speech deemed insulting to religion or speech that incites sectarianism”.

However, the real problem does not lie in the penal code itself, but the fact that the judiciary body and security forces in charge of implementing these laws are appointed by the same politicians that brought this country to its worst economic state ever since its existence. That’s why a revolution started back in October 2019, a revolution that the authorities have failed to contain or crush despite continuous attempts to do so.

First, they spread rumors that it was financed by foreign intelligence, then they claimed local parties hijacked it and when all failed, some went as far as claiming it’s serving Israel’s interest while lawsuits against activists in an attempt to silence them are still ongoing.

The key argument behind suing activists is that they are using profanity when attacking politicians and this is punishable by law. Some are claiming that they are being falsely targeted by the Revolution, yet instead of figuring out ways to build bridges, they are exploiting their positions to drag activists to jail and humiliate them with never-ending interrogations and intimidations.

Lawsuits Against Online Activists: A Thin Line Between Justice & Abuse of Power

Getting sued is not fun, especially in Lebanon but activists have proven so far to be resilient and determined to face their oppressors and challenge these “slander and libel” lawsuits. While politicians are trying to blame the “ill-mannered” activists or “fake news” cards, they’ve been getting a lot of heat for giving such minor offenses, if I may call them such, that much importance.

The real problem though is that some people are still falling for these politicians’ tricks instead of looking at the bigger image and fighting the right battles. Let’s take for example Gino Raidy’s most recent half-arrest because of a lawsuit raised by ex Minister Fady Jreissati.

You have people claiming Gino is cursing a lot of and disrespecting politicians and their families, and that this is not how the Revolution should behave, and others too blinded by their political allegiances that they think their Zaiims are Gods.

I will not address the second type of people because they’re hopeless, but to those not feeling comfortable with thee amount of profanity being used in this Revolution, you need to choose your battles wisely:

– I am against all sorts of censorship and for people saying whatever the hell they want.

Do I curse? No.
Do I approve of everything Gino, or any other outspoken activist, says or writes? Of course not.
Do I like the way he trashes politicians and readers? Sometimes.
Do I think we should abide by the law? Yes.
Do I trust the judiciary/security/political system in Lebanon? Of course not.

In other words, don’t feel offended or intimidated by activists and ordinary citizens swearing at politicians and leaders, and don’t claim there are laws to be respected, while almost 9 months have passed since the Revolution had started without a single arrest or corruption case unveiled. Those in power are cursing and disrespecting us on a daily basis, we’re paying them to drown us in sewers and garbage, and steal our lifetime earnings because of their incompetence and thefts.

The Revolution does not have an etiquette, and groups different characters and traits, from outspoken activists to ill-mannered ones to artsy and creative protesters. It’s called a revolution for a reason, and the fact that it is leaderless has been perplexing this ruling class for months now. Whether it should have a joint leadership or a clear program is a different topic that needs further discussion, but its stance that all means all is proving to be on point day after day.

To sum things up, the next time you hear about an activist being arrested for cursing a politician or a member of his family, sit back and think how many times this politician, or the party he represents, has made your life miserable and treated you like garbage. The Lebanese politician embodies everything that’s wrong with politicians, from corruption, theft, incompetence, arrogance and hypocrisy. Don’t help them reinforce their sectarian positions and strengthen their grip on the impoverished and jobless people, because you’re only helping them get back to power.

These lawsuits against activists are not meant to restore trust in the law, or to defend these politicians’ honor, but are bluntly abuse of power and a way to intimidate activists and weaken them. And even in case where some “decent” politicians feel offended, they need to grow a thicker skin and also look at the bigger image. If they’re truly claiming to be fighting corruption and working for a better Lebanon, now is not the time to waste government resources for personal vendettas, especially when the whole “slander and libel” law is questionable and outdated.