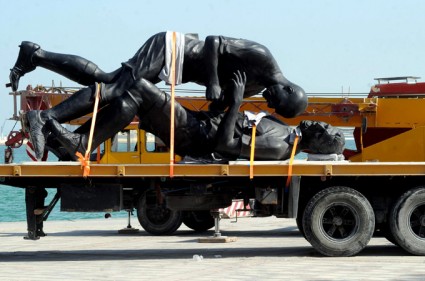 The statue was removed because it was slammed as being an anti-Islam idolization.

Qatar has removed a statue depicting a headbutt attack by footballer Zinedine Zidane following an outcry by conservatives who slammed it as anti-Islam idolisation.

The five-metre sculpture depicting the France footballer attacking Italy’s Marco Materazzi in the 2006 World Cup final was put on display on Doha’s corniche on October 3.

But the statue, sculpted by Algerian-born French artist Adel Abdessemed, appears to have offended Muslim conservatives, who saw it as a violation of religious tenets. [Source]