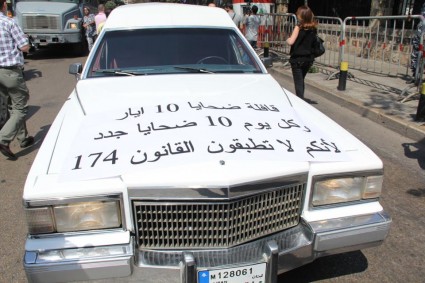 I passed by Gemmayzeh and Mar Mikhail yesterday and most people were outside the pubs smoking. You could see large crowds at some point in Mar Mikhail almost blocking the road. I even spotted some people smoking inside but the doors and windows were open, so I guess that makes it legal.

I don’t want to sound too pessimistic but I’ve seen violations everywhere I went lately, specially in the arguileh places that don’t give a damn about Law 174 anymore. Even though the Facebook Group Law 174 – No Smoking Lebanon is doing a great job reporting the businesses breaking the law, and even created a hot line (1735) to report violations, there’s no point in all that if there’s no one to enforce the law.

The pictures are taken from the funeral procession that was organized by the Tobacco Free Initiative (TFI) and the Tobacco Control Citizen Watch, with the support of the Union of Syndicates of Lebanese Professionals, in the name of the 3500 annual victims of tobacco in Lebanon and to point out the negligence in the implementation of Law 174.

The funeral procession was organized by the Tobacco Free Initiative (TFI) and the Tobacco Control Citizen Watch, with the support of the Union of Syndicates of Lebanese Professionals. These organizations and the Tobacco Control Research Group at the American University of Beirut warn the ministers of Tourism, Interior, Health, and Economy that they will escalate their actions if those ministers continue to neglect protecting the Lebanese from the top cause of death in the country. In addition, they urge citizens to be vocal in demanding their rights to a healthy environment, and to call 1735 to report violations. [Link] 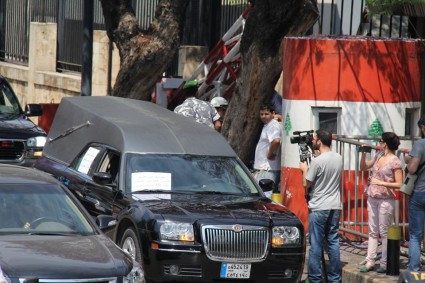