Earth Hour is an annual global event where cities from around the world switch off their lights for an hour. The purpose of Earth Hour is to remind us that we have to seriously start considering renewable energies as individuals and as a country. A couple of years ago, Achrafieh, Rmeil and Geitawi all went dark to celebrate Earth Hour and last year the serail as well as a couple of hotels also took part in it.

Of course a lot of Lebanese unwillingly participated in Earth Hour when electricity is off and they didn’t have a generator subscription as a backup, which makes us wonder if it’s truly worth it to celebrate Earth Hour? Personally speaking, I think we should take part in any movement that helps our planet and reduce pollution and I hope we get more companies, malls, banks, hotels and government institutions to go dark for an hour next year. Even if we don’t get electricity 24/7 and generators are causing even more pollution, we are still helping by cutting the power off even for few minutes.

On another note, there’s one Earth Hour event that took place yesterday in Beirut that didn’t seem right to me. There was a concert at Biel to celebrate Earth Hour. The event is presumably an environmental-friendly one but I’m pretty sure they need electricity or some sort of power for the lighting and the instruments, not to mention the pollution from cars and buses, which is definitely not the ideal thing to do for Earth Hour. What would have been nice to do was to have glow-in-the-dark parties in all pubs and night clubs and have candle-lit diners at restaurants. Again I don’t have much information in regards to that concert but I’d rather we stick to encouraging more and more individuals, municipalities, towns and cities as well as businesses to take part in Earth Hour than organize concerts and such events. Moreover, someone should ask the Energy Minister to compute the consumption before and during Earth Hour to see if it dropped and people are actually taking part in this global event. 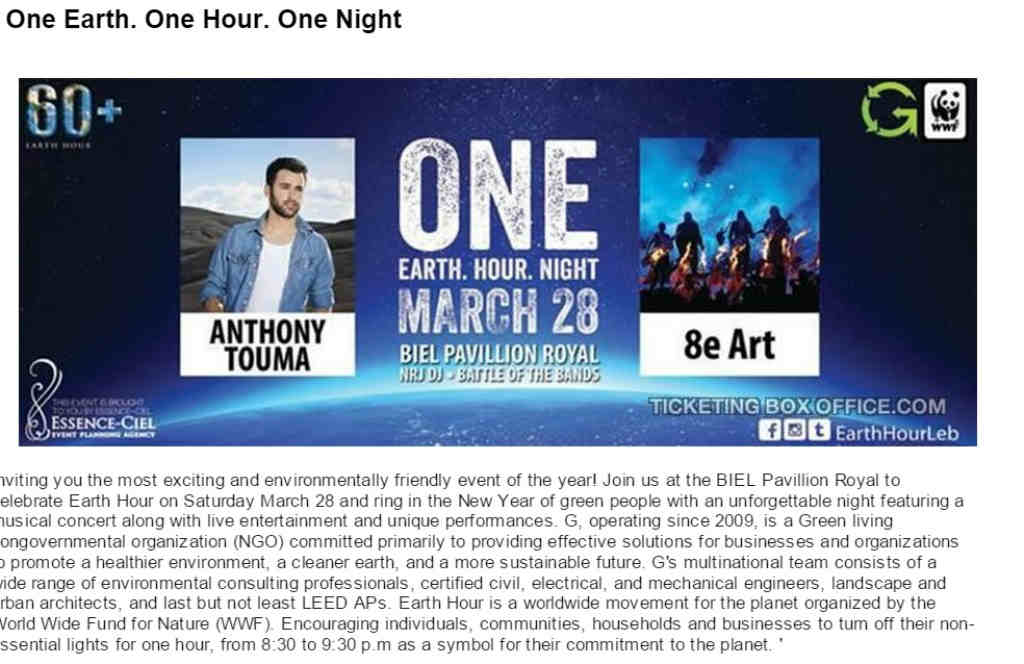 Achrafieh2020 thought of a different way of supporting Earth Hour this year, by pledging to plant trees all year long and transform Achrafieh into a healthier more livable environment.