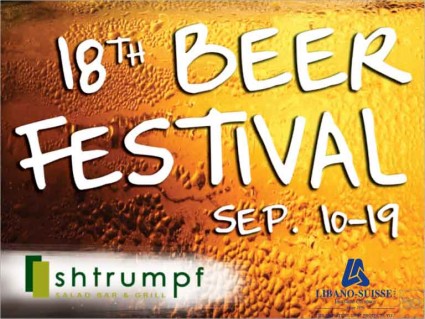 Schtroumpf restaurant was one of my favourite places in town and the beer and food there were as good as any other place. But it just lost it for some reason until a year or two back when it turned “American” and became Shtrumpf restaurant. Not sure why they changed the name, but i went for dinner the other day and it was very good, and their salad bar is awesome. There’s soup, a toaster and a large variety.

They are currently holding their 18th beer festival where you pay 19$ and drink beer as much as you can. The festival is held outdoors and includes live bands and entertainment. You need to reserve before going though.

Last time i attended, the atmosphere was really nice and the place crowded but service was a bit slow. Also, not including any food with the beer kind of sucks, specially that they offer open beer and wings night every Tuesday for 16$ or so.

Nevertheless, their beer festival is worthy going to, and i can’t wait for their cheese and wine nights in winter.