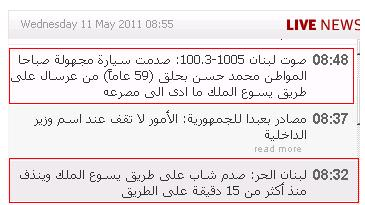 When you read this piece of news, you’d think the driver who hit the 59 year old person and left him to die is immoral and an asshole, but the truth is you might want to do the same thing if you ever hit a person with your car in Lebanon.

Why is that? Because of our rotten and archaic laws that blame the driver under any circumstances, even if one throws himself/herself in front of your car. Indeed, looking at the place of the accident, this highway is one of the most dangerous in Lebanon yet people insist on crossing it and not having a bridge is not a good enough excuse to risk your life and blaming the government afterwards.

I remember at some point there were beggars throwing their children in front of cars to get some money out of it and there was nothing you could do about it except driving away.

Even people passing by might not want to call the ambulance because they could be dragged for interrogation later on. I personally saw someone lying on the road on my way up to Mansourieh few years back and did not hesitate to call the ambulance yet luckily did not receive a call afterwards, probably because it was a foreign worker and no one reported him as missing, or officials just ignored the whole thing.