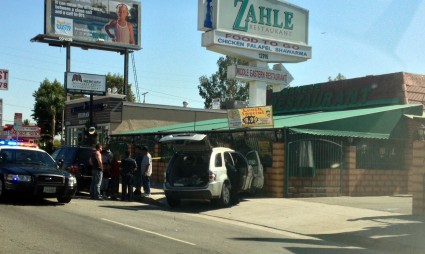 This is a couple of months old but I just found it online on [lacantdrive.com].

Check out what the website said about the driver. It’s hilarious!

OK, hold the phone, someone’s been messing with my falafel pita. I took this photo while crawling in sluggish traffic this Tuesday afternoon. Seriously, how fast could you possibly be going on Victory Blvd. (going east, just west of Coldwater Canyon) that you would careen your SUV into this Lebanese restaurant? Maybe the driver got the gas and brake pedals confused. Maybe the driver was texting or was too engrossed in a phone conversation and lost focus on what he/she was doing. Your guess is as good as mine. I don’t know about you, but if I don’t like someone’s hummus, I just write a bad review on Yelp. But in North Hollywood, I suppose you can make a bigger statement by ramming the offending establishment…that’s how they role in NoHo, yo