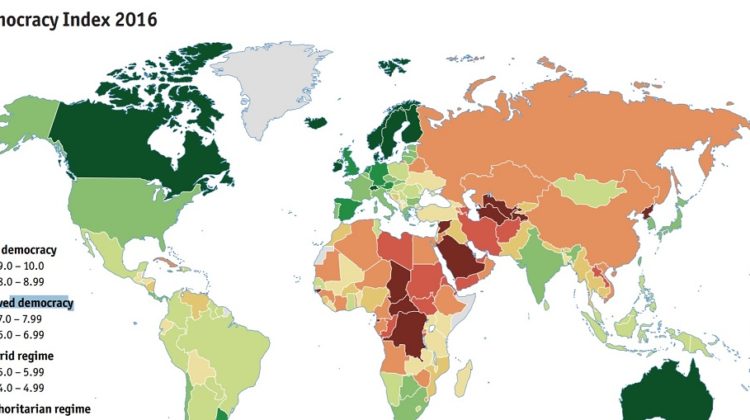 The Economist Intelligence Unit’s Democracy Index for the year 2016 is out. It is a yearly report that classifies countries as one of four types of regimes:
– Full Democracy: a nation where civil liberties and basic political freedoms are not only respected, but also reinforced by a political culture conducive to the thriving of democratic principles.
– Flawed Democracy: a nation where elections are fair and free and basic civil liberties are honored but may have issues (e.g. media freedom infringement).
– Hybrid Regime: a nation where consequential irregularities exist in elections regularly preventing it from being fair and free.
– Authoritarian Regime: is a nation where political pluralism has vanished or is extremely limited. These nations are often absolute dictatorships, may have some conventional institutions of democracy- but with meager significance.

If we look at Arab countries, Lebanon came out on top (Score 5.59) and is the closest to being a democracy, even though a “flawed” one based on the EI scores. Palestine & Iraq are the only other Arab countries that were classified as hybrid regimes while the rest of the regimes are all authoritarian. In terms of the Middle East & North Africa, Tunisia is best-ranked and the only “flawed” democracy in the whole region. Gulf countries were all considered as authoritarian.

Hybrid regimes are nations where consequential irregularities exist in elections regularly preventing them from being fair and free. These nations commonly have governments which apply pressure on political opponents, non independent judiciaries, widespread corruption, harassment and pressure placed on the media, anemic rule of law, and more pronounced faults than flawed democracies in the realms of underdeveloped political culture, low levels of participation in politics, and issues in the functioning of governance.

The biggest surprise was the United States, which were downgraded from “Full” to “Flawed Democracy”. You can check out the full report [here].