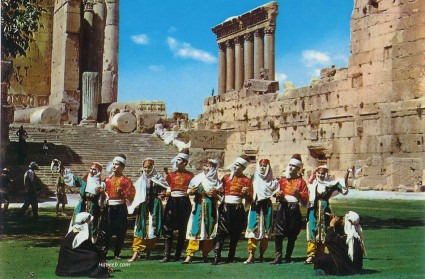 It took forever to finish, it was supposed to look like this, but turned out to be a complete mess. A bridge cutting the highway in half, roads leading to nowhere or jamming other existing roads, a homemade ladder leaning against the column, and other features making it an eligible candidate for the new 7 wonders of the world.

Rank 4: Valet Parking in Beirut
They are considering forming a political alliance to take over the world as they are everywhere, drive everyone’s cars, steal the cars if they feel like it, don’t allow anyone to park anywhere, are ready for war and most importantly are international.

Rank 3: Zein el Atat & JuJuBa
He’s a fraud, his ads are terrible, he could kill you with his herbs, yet he has more branches than all Lebanese banks combined. A wonder that could only exist in Lebanon.

Rank 2: Price of Man2ouche at Zaatar w Zeit
Ever been to a French restaurant and ordered “un poussin dÃ©sossÃ© et legumes”, or in other words Djeij Msa77ab ma3 Toum wou Batata? Well ZWZ has won the hearts of all Lebanese by overpricing his Manakish and naming them in a sophisticated way. You could pay up to 10,000 LL for a Cheese Man2oushe.

PS: I posted this around 1 a.m and it was inspired from few messages and emails I received (none with that exact list though). I chose few wonders and spiced them up a little bit and compiled them into a post. I am not claiming authenticity for any list nor care about such things, this was written just for fun.