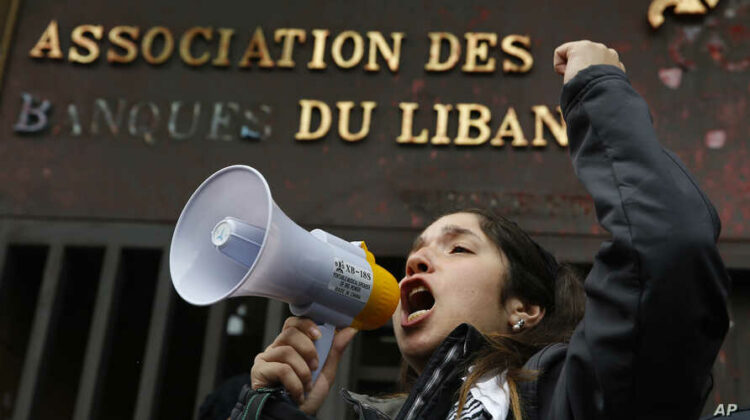 A protester leads a chant during ongoing protests against the Lebanese political class, in front of the building of the Lebanese Association of Banks in Beirut, Lebanon, Thursday, Dec. 26, 2019. (AP Photo/Bilal Hussein)

Ever since the Lira crisis begun, all experts agreed that lawful capital control measures needed to quickly be put in place protect the remaining foreign reserves and avoid further depreciation of the Lebanese Lira. Unfortunately, the only controls that were implemented were arbitrary and illegal ones by banks. As a result, depositors were denied access to their dollars while those with enough “wasta” were able to sneak some money out of the country or their accounts.

Last week, Parliament’s Finance and Budget Committee were finally able to draft an “urgent” capital control law and it’s a complete disaster. To sum it up in few points:

– Depositors will be allowed to withdraw LL20 million per month, unless the Central Bank decides otherwise after consulting with the Finance ministry.
– Depositors can withdraw half of their monthly limit in cash dollars, unless they accumulated dollars by exchange Lira to US after 2016. Not only is this point unclear but it’s not even feasible given the dollar shortage.
– Families of Lebanese students studying abroad will be allowed to transfer up to $10,000 to cover tuition fees and living expenses abroad. However this is allowed at the moment and most, if not all, banks are not complying.
– The exchange rate for dollars withdrawals in Lira will be defined by the Central Bank.

The draft law blamed the pandemic and the national debt on the Lira crisis and the inability of banks to provide dollars. Moreover, its mentioned that depositors who are denied transfers should ONLY report to a BDL unit to challenge the decision, and the unit’s decision cannot be appealed not even in court.

To sum things up, the capital control draft law gives more power to the banks and BDL and yet somehow the Association of Banks in Lebanon is not satisfied with the draft. In all cases, one thing is for sure here: It’s too late for a capital control law and Lebanese will continue to bear the consequences of this incompetent and criminal ruling class for the months if not years to come.