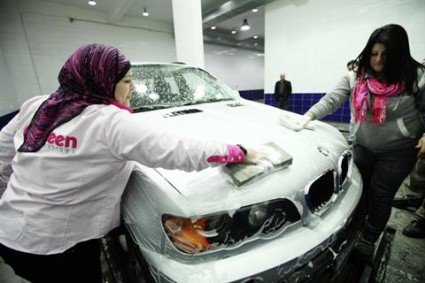 Women pumping gas might seem like a strange sight in Lebanon, but that could change with the Queen, the first and only gas station in the country run and operated by a group of women. Queen, â€œa gas station with a feminine sensationâ€ as it labels itself, was opened with the idea of giving women the opportunity to work in a traditionally menâ€™s job. [Link]

I am not sure if they got inspired from the post I had written back in April 2011 about opening a women car wash in Lebanon but those are not the women I had in mind. Also, if you read the whole article, you will notice there are men working at the station, which pretty much goes against the original idea.