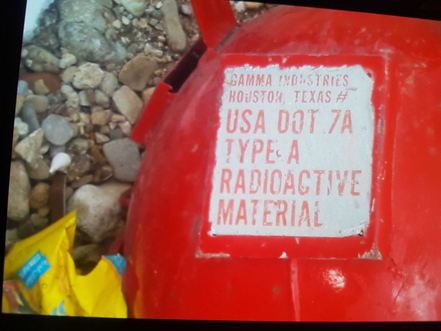 I was reading yesterday that a gas canister was found on Ouzai’s beach and that the the Lebanese Atomic Energy Commission had to be called in! As it turns out, the canister has a label on it that says “Radioactive substance” and no one knows how it got there.

The head of the Lebanese Nuclear Energy stated that “the threat of such type of material can be contained and there is no need for panic” but I’m not really sure if he’s saying that to re-assure people until they figure out how the hell that thing got here.

If the canister came from the sea, we need to figure out where it originated from and which areas were contaminated, which is impossible to do, and if it was deliberately placed there, we need to know who has such canister and why did they throw it on the beach? Unless of course they’ve been throwing them recklessly in garbage bins and this one ended up on the beach by chance, which makes things worse.

I’m not really sure why they’re taking things so lightly, but this is some serious shit and the whole area where this canister was found needs to be examined. More importantly, those who found the canister or touched it need to be checked by the Ministry of Health.