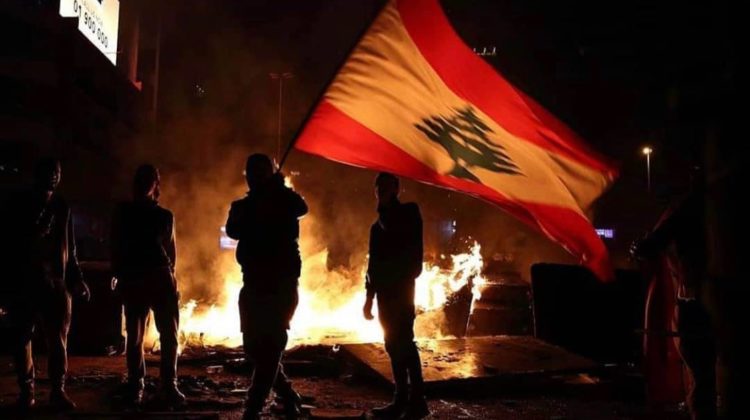 Today marks one year since the Revolution started, one year since hundreds of thousands of Lebanese from different sects and backgrounds took the streets to ask for a real change. We were fed up, we all wanted a decent country to live, all except the traditional & rotten parties in power that had other plans.

At first, they kept quiet, then they masterfully laid out a plan to kill the revolution at any cost. How so?

– They forced their partisans out of the streets, and brought in thugs to infiltrate the crowds, beat up protesters and cause trouble. They also cowardly set fire more than once to tents in Martyrs Square.

– They decided to make good use of the situation in certain areas to score political points against their opponents,

– They exploited their positions to go after protesters legally and arrest them unlawfully. Many were tortured and even minors got arrested at one point.

– They turned security forces into their own proper militias and started firing at protesters and using excessive violence at every occasion.

This is just a small sample of what they pulled off, and the pandemic came to help them out as they forced a lockdown mainly to keep protesters away from the street. Then came the Beirut Blast where they declared an unjustified state of emergency just to suppress protestors, instead of helping out families in distress.

Despite all that, the revolution remained active, online if not on the ground, and forced a new “normal” in dealing with Lebanese politicians, especially those who considered as “untouchable” or beyond critic before. “All means all” is the most genuine slogan to ever come out of a revolution or a movement in Lebanon, and those in power are proving it right day after day.

When is change happening?

Prospects of a drastic change were very real in the first few weeks of the revolution, but the Sulta fought back and fought hard to keep the status-quo. Still, small gains were achieved and we’re beginning to witness change at several levels, such as student elections, Beirut Bar Association elections, the French initiative, the Bisri dam etc ..

Politicians can no longer get away with their thefts, they can’t even go out to have a dinner without being harassed or exposed. If elections were to happen today, the same ones would probably be re-elected but not because Lebanese are “sheep” as many claim. Elections without reforms is a trap, and I’ve already covered this in a previous post.

At this point, and following the August 4 Port explosion, it’s very hard to ask people not to despair and remain strong, but you have to keep in mind one thing: Everything that happened from last October till today is proof that this whole system is crumbling and has expired. We’re witnessing the fall of a whole structure, a rotten corrupt & incompetent body that has drained the country for decades, and it’s going to be an ugly fall.

We must keep pushing until we get a capable government of implementing reforms and an independent judiciary body. Those two points are key to any real change and the Sulta will fight with everything it has against them. We all wish change would happen overnight, but everyone knows it’s not gonna happen through peaceful protests and that the alternative is unpredictable especially with all the armed thugs & small militias controlling this country.

One year after October 17, we can only hope things will get better for Lebanon & the Lebanese, and that an inner revolution starts within every rotten party so that loyalists realize they’re being screwed by the same leaders.