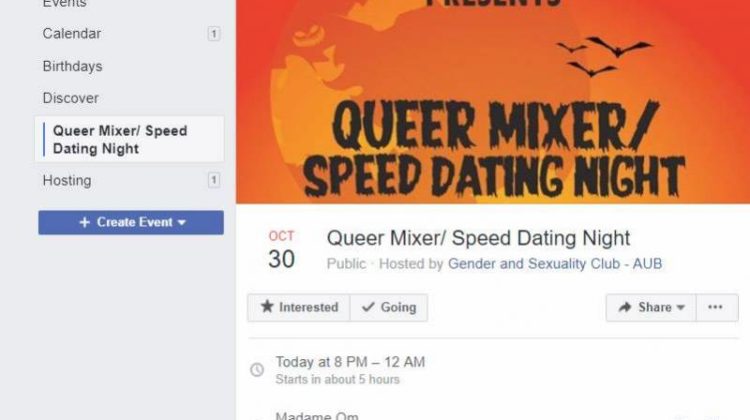 Two days ago, I was watching a Sheikh on Joe Maalouf’s show arguing in favor of underage marriage and providing with the most absurd arguments to justify such heinous yet somehow still legal practices in Lebanon. This morning, I wake up to the news of Halloween themed queer speed dating/mixer being cancelled for promoting immorality. It was Sheikh Qabbani who led the attack on this event, calling it a disgrace for Lebanon and all Lebanese. Indeed, a speed dating/mixer night is hell on earth but allowing 14 year old girls to marry 30-40 and even 50 year old man is fine.

In all cases, I never expected such an event to be approved in the first place, but the worst part for me is how a club aimed at establishing dialogues for long-lasting changes on the issues of gender and sexuality was labeled as a “sex club”. Even LBCI fell for that mistake and “التي ينظمها نادي الجنس” while covering the news.

To our members, allies, and supporters,
We would like to take this opportunity to thank you for your continuous help and encouragement with our events and activities through the years. We would also like to thank the Office of Student Affairs and the American University of Beirut for their support and endorsement. We are humbled by the ways in which we come together in solidarity, echoing the club’s mission to provide a safe and educational space that mobilizes around fundamental bodily rights for people of all genders and sexualities on and off campus.
Tonight, a Halloween themed queer speed dating/mixer night was meant to take place. The event, a Halloween costume party, was misrepresented as being hosted by “AUB Sex Club,” by people who are clearly unfamiliar with our club’s ethos, activity, or even name. It was accused of promoting immorality, when all its true purpose was the provision of a safe space for a marginalized community on the account of its bodily autonomy, gender expression, and non-normativity. The event held no expectations of the participants and had no sexual implications of any nature.
As we value safety first and foremost, we canceled the event. We understand the disparities among people of different backgrounds and the inability to afford the luxury of public visibility. We are aware of the structural difficulties that make some people more vulnerable than others, and we decided not to go through with the event as long as safety is not guaranteed, as we will not compromise the well-being of our members and friends. The event was meant to be a safe space for conversation, therefore, we could not but cancel under the current circumstances.
The LGBTQ+ community and the religious community are not mutually exclusive. We, at the Gender and Sexuality Club, work on the intersections and the freedom to be heard, understood, and have access to basic rights such as freedom of consciousness and autonomy over one’s body. We are inclusive of migrants, refugees, stateless people; our existence is broader than a single realm of struggles, and we aim to add our point of view, support, and experiences to the mix.
We will remain strong in our stance. This will not deter us from future events or struggles, we use the experience from this and many others to build ourselves up as we fight for justice.