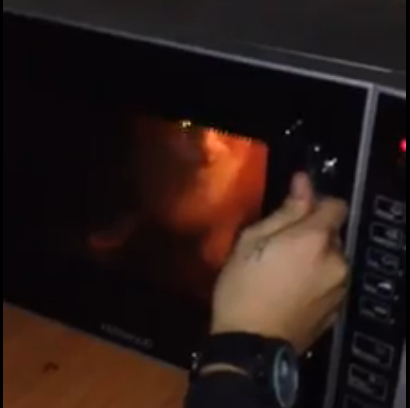 Too all who watched the video about the cat in the microwave and dissing me. Look i just filmed it “not hurted it” DISS WHOM HURTED IT i was wrong about filming it and im sorry … i never meant to send you a bad picture about me in that way. hear my voice clearly what i was saying to him about the cat. Btw i have a cat in my own house and its name is blue female Type “Angora” you can see it in my albums and i treat it good “You Should never hurt a cat and im sorry”

Mohammad Jallad, the guy who was filming his friend trying to microwave a cat, apparently issued an apology that Nemr shared on his page. The video is no longer available and I am glad to see an apology specially after his early comments but that’s still not enough.

The cat needs to be taken away from Jallad’s friend Hassan Hammoud and handed over to Animals Lebanon. As far as the punishment is concerned, I think what Nemr suggested, which is a hundred hours of pro bono, charity, work with Animals Lebanon, is reasonable enough.