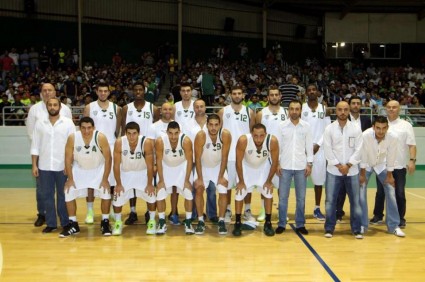 Lebanese businessman Wadih al-Absi declared during a Press Conference yesterday that he will no longer be Sagesse’s financier for the 2012-2013 season. He claimed that ever since he entered the Sagesse Club, he called for keeping politics away from sports yet he finished his Press Conference by attacking a rival political party.

Honestly I am glad he left the team and I hope others will follow and leave Sagesse alone, starting with Imad Wakim and whomever is behind him. Even if Sagesse fans are overwhelmingly supportive (That’s what Absi’s opponents say) of a certain political party in Lebanon, a basketball team requires a competent management and long-term strategies to sustain the team and its players and the fans want to see their team win at the end of the day. Having said that, I honestly can’t but acclaim the Sagesse fans who are probably fed up with all this mess yet keep on showing to every game to support their team.

Basketball in Lebanon has never been the same ever since President Choueiri left and I don’t expect it to get any better unless drastic measures are taken and a proper federation is formed. Every year, we have a new Pr. Choueiri-wannabe willing to invest millions of dollars in 1 or more teams before it gets messy and he drops out.

To be honest, the problem is quite simple yet no one’s willing to acknowledge it. Basketball teams don’t make money in Lebanon and the people investing in them, whether it is for personal reasons or not, realize sooner or later it’s not worth it and quit. After all, pouring millions into one team does not mean the team’s going to win all titles. That’s not how basketball works.

IMHO, the only way to salvage whatever is left of Lebanese Basketball is by doing the following:
1- Limit the budget of all teams to a certain range, say between 500k and 1M a year.
2- Limit Foreign players to just one per team as long as his yearly salary doesn’t exceed 15% of the total team’s budget.
3- Naturalized players or Lebanese-American players will be paid the same way local players are. It is absurd to pay a Lebanese playing in the US 20 times more than a Lebanese player, not to mention how discouraging and frustrating this is for the rising talents.
4- Teams will be penalized financially if their fans were to shout political or racist slogans. This applies to the players and management as well.
5- Full-time Members of a political party, sons of politicians and officials etc, are not eligible to preside or take part of the team’s management.
6- Management must submit a 5-year financial plan to help make their teams profitable and improve sustainability.

Of course there are more issues to tackle but those are good enough for a start and if there’s anyone in the current federation really concerned about the future of basketball in Lebanon, they have to step up and do something before it’s too late. Until then, and I agree with Absi on that one, we will all be enjoying an exciting season since elections are coming and everyone’s throwing money left and right, but don’t expect much next year.