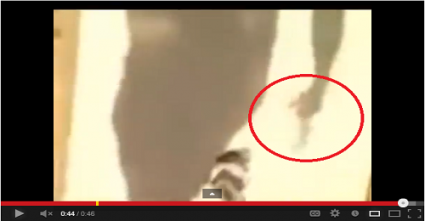 Ever since I posted the video of the Lebanese man filming his wife committing suicide, I got complaints from people asking me to remove it/ report it claiming that it’s inappropriate.

To be honest, I saw the video again and again and didn’t find anything violent or graphic. What disturbed me the most was the idea of a man taking the time to film his wife while she was committing suicide instead of preventing her because filming her obviously didn’t help. Having said that, I understand that it must be horrible for her family to see the video and they have every right to ask for its removal and I will be the first one to take it out, but I think the way the video went viral helped shed the light on few serious matters:

1- Some are saying there’s a longer version of the video where the husband is filming the whole house before he spotted his wife about to jump and kept filming. As convincing as this may sound, I still find his reaction really weird but I’ll wait for any investigation results to come out.

2- How did the video reach a local TV knowing that it was in the hands of the Internal Security Forces? Why didn’t the TV consult with the proper authorities before uploading it? Were any measures taken against the officer who leaked it?

3- There’s a shadow of a man holding something in his hand as shown above in the video. Some are suggesting there was someone else and others are saying this might be some tool the man is holding or I don’t know what. LBC clarified that matter too by showing that those were keys.

4- Eye witnesses are saying it took almost 45 minutes for any ambulance to show up which Luna clarified in her interview with the Red Cross.

I know those are all speculations but I hope we will figure out what happened as it is very hard to believe that a woman would throw herself like that for no reason after she just got married, and her husband would be standing there filming her while she commits suicide (He also attended her funeral). I am not accusing anyone of anything but it is out of respect for the victim and her husband that a proper investigation takes places specially after the video spread.

Unfortunately, I have a feeling this tragic incident will end up like other unresolved mysteries in Lebanon.

In all cases, my sincere condolences to the family of the victim and her husband.