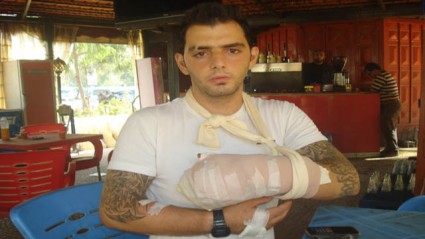 A friend of mine sent me an article published in Annahar yesterday about a young Lebanese man called Ehab al-Azzi who claims that he had his left hand’s fingers cut off with a sword on Sunday in Tariq al-Jdideh by Sunnite extremists after they realized he was a Shiite.

I was hesitant to post about it at first because I felt his story didn’t add up, and as it turns out, he had fabricated the whole story to receive free health care from the Health Ministry.

He confessed that he suffered wounds on his hand after the motorcycle he was riding on the airport highway collided with two other motorcycles,” the statement read. It added that Azzi then had a fight with the riders when one of them stabbed him with a spear. [DailyStar]

What Ehab did could have been regarded as an isolated event in peaceful days, but fabricating such a story in critical times like that is very serious and could have ignited further sectarian clashes in Beirut. That’s why I believe he shouldn’t be thrown in jail for just a few days in order to set an example for others.

Last but not least, I have constantly critisized the Lebanese Media for their exaggeration and unprofessionalism in covering certain events. Having said that, and with all due respect to Annahar, but when someone tells you that he was attacked by militiamen in Beirut that looked like Afghans (I assume he meant Talibans), with one of them holding a big sword and threatening to cut off his head, you ask him if he’s been smoking some pot first.

See Also:Who Should be Interrogated Over The Beirut Blast?
Posted By Najib
Categories CRITIQUES,INFORMATION,LEBANON