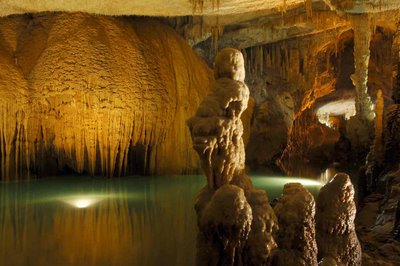 I’ve been criticized by my family, some friends and blog readers for not supporting nor voting for Jeita. I promised to keep quiet until the campaign’s over but now that it’s done and Jeita lost, I will explain why N7W was a bad idea all along.

1- As many bloggers have pointed out earlier, UNESCO does not recognize this competition and the voting is a joke. You can vote a zillion times, come up with a zillion fake emails and I received in the past week not less than two or three emails asking me to download softwares that help get Jeita more votes. So it’s a competition of who can cheat better.

2- Putting aside whether this competition is a scam or not, what truly pissed me off was the amount of money the Lebanese government and those behind the Jeita Grotto campaign were investing into this competition.

– If Jeita were to win the N7W competition, how much time will it take us to get back this kind of money? Were they expecting the whole world to start coming to Lebanon to see Jeita Grotto? Do you really think people will start going to the Amazon or Komodo more now because they won?

– Assuming more tourists will show up to visit Jeita. Has anyone done an estimate on how much it will cost us to prepare the Jeita area for tourists? Has anyone seen the road leading to Jeita? The restaurants next to it? The trucks that empty their waste in the valleys near the Grotto? Of course not.

– Assuming more tourists come and a plan has been put in place to turn the area around Jeita Grotto into a touristic one, can anyone imagine the traffic that will result from such a thing? Did the concerned ministry take this into consideration? Keep in mind the road leading to Jeita is the one leading to Feytroun, Hrajel, Ajaltoun, Klayaat and most importantly Faraya.

All this being said, only a fool would spend that much money without calculating the estimated return on investment because there’s no way we could have profited from this competition.

3- Last but not least, did anyone take a look at the 7 winners? No offense to Jeita Grotto, but objectively speaking, we don’t deserve to be among the winners. If I were not Lebanese, I would have easily picked 7 different wonders.

4- On a last note, is our country that financially stable to afford wasting millions of dollars over such a campaign? Isn’t it better to invest them in public schools? Or protecting whatever is left of our forests and planting more Cedars?

I would rather donate the money to the Lebanese National Audiovisual Media Council so that they start registering our blogs and websites than enter this stupid n7w competition.

I hope I was not too harsh but what we did throughout this voting campaign resembles sending money to a Nigerian prince and refusing to admit we’ve been scammed.