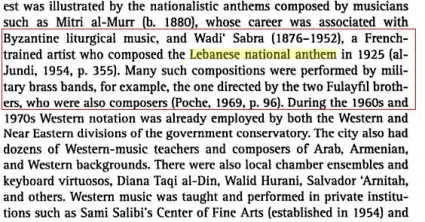 Since Mark had posted about Al Jadeed’s report on our national anthem [Link], I’ve seen the video several times and done some research and I am deeply convinced that AL Jadeed just wanted some attention and nothing more, specially when they got Ghassan Rahbani to enlighten us on this issue!

Minute 1:03 The video being shown was shot in 1959 and the sound in the background was supposedly from that year or later.

Minute 1:49 The Reef Republic anthem was destroyed in 1926 and “Nasheed el Reef” written in 1924 without a tune. The music for the National Anthem was prepared in 1925 [Link] by Wadih Sabra, which means that the lyrics were done in 1925 or before (Given that a competition was organized to choose the best tune).

As far as the lyrics are concerned, they are very different from the Reef anthem except they both were done on “Ba7r el Raml” which was widespread back then.

As far as the music is concerned, there’s no proof that Mohammad Flayfel did the music and there’s no mention of when he did it. Add oto the fact that his own son clearly stated that his father did not do it.

Therefore, and in the lack of any proof that the music was done by Mohammad Flayfel, Moroccans are the ones who stole the anthem and set it as the royal anthem and not us.

Last but not least, the LAST person allowed to talk about plagiarizing tunes is Ghassan Rahbani and the Rahbanis in general. I love Fayrouz and all but it is a known fact that a considerable number of her songs are adaptations of old tunes.

For those who are unaware of this fact, check out those songs and let me know of what they remind you.
Polyushka Polye
Mozart Symphony #40
Mendelssohn Violin Concerto Movement 1 Allegro

Don’t get me wrong as I am not trying to claim Fayrouz is bad or fake. On the contrary, I find it normal for artists to get inspired from beautiful music and re-adapt it with their own country’s lyrics.

Having said all that, let’s hope this Masquerade that Al Jadeed started is thrown in the trash can where it belongs. Our Lebanese National Anthem is unique and beautiful and its lyrics are great, so let’s play it loud and proud. [National Anthem]