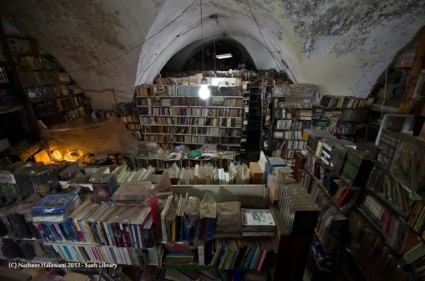 A lot of people haven’t unfortunately heard about this decades-old library in Tripoli up until it got torched today, so I did some research and pulled out old pictures and information about the library and its owner Greek Orthodox Priest Ibrahim Sarrouj.

Al Sa’eh Library was founded in 1970 by the Orthodox Youth movement and consisted of a single room. Few years later, the library published around 10 books. In the early 1980s, they gradually started releasing Orthodox publications. In 1983, Samir Makhoul, Toni Boulos, Ibrahim Sarrouj decided to expand the library and bought the warehouse next to it.

Nowadays, the library has over 80,000 books (not copies), out of which 400 rare books. One of the oldest book in this library according to Father Sarrouj is one that dates back to 1817 written by an American Colonel and is estimated at around $3,000. Speaking of Father Sarrouh who’s a highly esteemed and respected individual in Tripoli, he has shown great interest in Islamic Studies despite being a Greek Orthodox.

The loss of this library is a huge one for Tripoli and Lebanon as a whole. I wish officials would have taken the necessary precautions to preserve it and protect it from the assholes who burned it down.

Footage from War-Ravaged Down Town Beirut ...