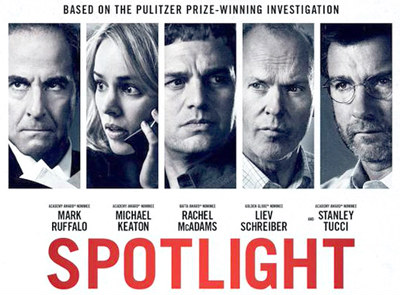 One of the biggest surprises of the Oscars last night was “Spotlight” winning the award for Best Picture. Everyone was expecting the Revenant to clinch the award, after receiving two of the biggest Oscars of the night (Best actor for Leonardo Di Caprio finally! & Best director) but it was Tom McCarthy’s drama about the sexual abuse scandal in the Catholic Church that took home the best picture Oscar.

In case you are wondering why we barely heard about the movie “Spotlight” in Lebanon, it’s because the movie never got here and probably won’t be showing in Lebanese theaters anytime soon. It wasn’t banned by the Lebanese authorities as it was rumored, but apparently the distribution company didn’t even consider showing it in Lebanese theaters. This was confirmed by Father Abu Kassem, head of the Catholic Information Center, who stated that they never received the movie for approval but that they didn’t mind showing it if it was an objective one and highlighted how the Church reacted to these accusations and punished these priests.

I’m not sure if the General Surety commented on this matter or not, but this is yet another proof that we need a law in Lebanon to stop film censorship, or auto-censorship in Spotlight’s case, and revoke the role of The General Security and religious committees in licensing, monitoring, and censoring creative works.

Until then, you can probably buy Spotlight from any DVD store in Lebanon or just download it online.

PS:The movie won’t be shown anywhere in the Middle East, not just Lebanon.

In 2001, editor Marty Baron of The Boston Globe assigns a team of journalists to investigate allegations against John Geoghan, an unfrocked priest accused of molesting more than 80 boys. Led by editor Walter “Robby” Robinson (Michael Keaton), reporters Michael Rezendes (Mark Ruffalo), Matt Carroll and Sacha Pfeiffer interview victims and try to unseal sensitive documents. The reporters make it their mission to provide proof of a cover-up of sexual abuse within the Roman Catholic Church.