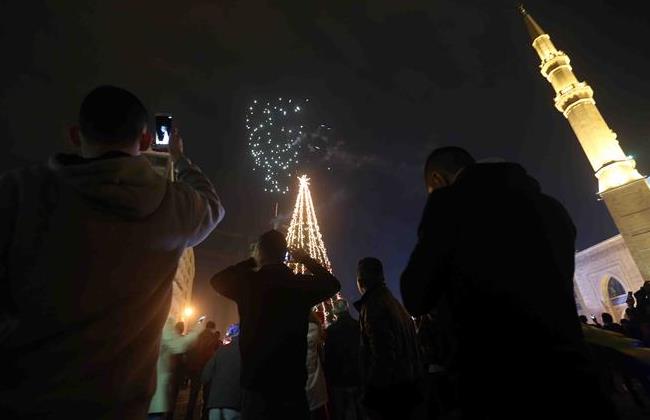 I always enjoy watching NYE fireworks from around the world mainly in London, Sydney and New York. As far as the Middle East is concerned, Dubai has been impressing the world with a spectacular show around Burj Khalifa every year and yesterday’s show was even more impressive than last year. Of course we also had fireworks planned in Beirut but most Lebanese I know are sharing Dubai’s fireworks for 4 main reasons:

1- Dubai’s fireworks were the most expensive in the world ($6M) and Dubai broke the Guinness record for the world’s largest pyrotechnic display, setting off 500,000 fireworks in six minutes. It’s very hard, even for New York, Sydney and London, to compete with a city that has something as big as Burj Khalifa.

2- Christmas decoration was poor this year in Beirut and NYE celebrations were also shy. I don’t know why the Beirut municipality is not spending much this year (money is not an issue though) but we barely heard about the fireworks and I haven’t seen any videos and only a couple of pictures online and Instagram. I think it’s quite shameful as we had some really cool fireworks few years ago in Beirut and it would have been nice to keep this tradition going and let people look forward to this spectacle.

3- Celebratory gunfire is still very common in most areas in Lebanon, even in Beirut. A lot of Lebanese don’t like fireworks and would rather fire their guns and even machine guns to welcome the new year. It’s stupid and dangerous but a lot of people still do it. Check out this [video] taken yesterday at midnight.

4- Cities like Jounieh and Jbeil are becoming more popular every year and are organizing cool fireworks and shows. Of course this is a positive thing but Beirut is the capital and NYE celebrations should be special there. Moreover, a lot of Lebanese love to spend New Year’s Eve in the mountains, like Faraya, Mzaar, The Cedars, Broummana, Zahle, Ehden as it’s far from the city’s traffic and it’s nicer and cosier specially when there’s snow.

So until we have cool fireworks in Beirut, enjoy Dubai’s stunning NYE spectacle: