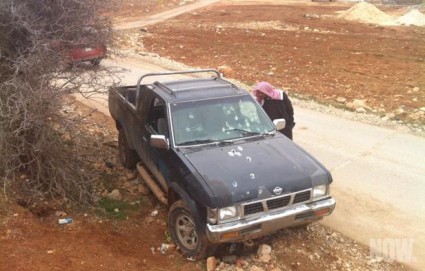 I am not really interested in the reactions we hear about this incident, but more than about the stories being circulated every couple of days. None of the them add up to be honest and all fail to indicate who are the other kills and the names of the injured soldiers. I hope a clear and honest investigation will take place to clarify why things went wrong and why two army men got killed.

The funny part about the story below is that those eye witnesses (all women) remember and saw everything except what happened to the men who killed Khaled Hmayyed, which is the most important part of the story lol.

The LAF announced that Major Pierre Bechaalany and Adjutant Ibrahim Zahraman had been killed after being ambushed during an operation to arrest Khaled Hmayyed, a 45-year-old Arsal resident wanted on terrorism changes. According to official statements, during the operation the soldiers were attacked by a group of armed men who killed the two officers. The LAF placed checkpoints at all the entrances to the village in search of the suspects and sent a list with the names of 80 wanted people to the municipality.

However, many villagers in Arsal who claim they saw everything on Friday tell a different story from what the LAF has been reporting.

The Toyota pickup truck that Hmayyed was driving at the time of the incident is still at the location of the shooting. Municipality council members said it will not be moved until an independent commission is named to investigate the incident instead of the Lebanese military intelligence.

The suspect was shot through the front widow of the car, with what appears to have been a machinegun. Hmayyed’s neighbors say they saw everything. Most of the witnesses were women, because at noon on Friday, most men were at the mosque to pray.

“They came with two cars, a jeep and a van,” a woman in her 60s told NOW. “They waited over there in the bushes, and when he came out of his house and drove onto the road, they stopped him, one car from the back and one from the front. Then men in civilian clothes shot at his car. I don’t think they killed him on the spot, because I saw them while they dragged him out and they shot him in the head. Then they took the body away to their car,” she said.

“I live right there, next to his house,” said a young woman standing nearby, pointing toward a group of houses around 100 meters away from the road where the shooting had happened. “Why didn’t they come to take him from home? Why did they have to kill him like this?” she said, sobbing.

“We all thought they were Hezbollah, because the two cars were civilian and the people who shot him were wearing civilian clothes,” the younger woman said. “The army with the Hummers came in later, after the people attacked those who killed Khaled [Hmayyed] because they were taking his body away. The army came in to put an end to the fight. One of the officers [Bechaalany] had been shot in the head, I saw him. He died on the spot. The other man [Adjutant Ibrahim Zahraman] was shot in the chest, and we took him to the municipality building. He died because the ambulance did not come in time,” she said.

It is not clear what ultimately happened to the men whom villagers say killed Hmayyed. [NowLebanon]