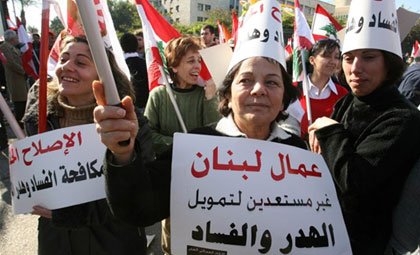 Despite the dilemma over the funding of the new wages scale, the salaries hike wasn’t limited to public sector employees but also reached the salaries and compensations of the three top presidential posts of the country, the ministers and the parliament members, As Safir newspaper reported on Tuesday. [Source]

Seriously? Is that the appropriate time to give raises to MPs and ministers? The funny thing is that the Economy and Trade minister is actually justifying this move, saying “the raise was equally distributed between everyone”. Couldn’t he have exempted high officials, MPs and Ministers from this law? How hard could it be?

Two months ago, Standard & Poor’s downgraded Lebanon’s outlook from stable to negative mainly due to its high public debt burden and large current account deficit. Instead of trying to cut down costs, we now added $1.2 billion for our state treasury to cover.