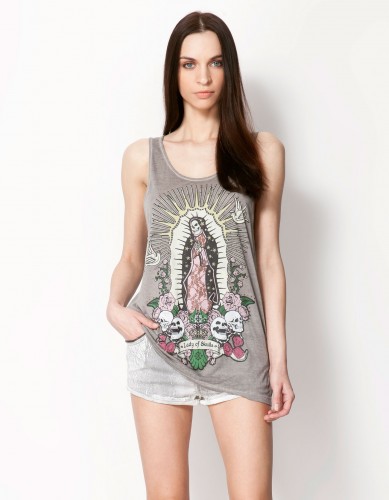 Update: Apparently this is Santa Muerte, a sacred figure and feminine skeletal folk saint venerated primarily in Mexico. I think I’ve seen it in one of Breaking Bad’s episodes. Thank you Posh!

I’ve seen many on Facebook today criticizing Bershka’s Lady of skulls shirt that disrespects Virgin Mary. While such a shirt may be considered as an insult to some Christians in Lebanon, I don’t think we need to make a big deal out of it. In fact, I am sure there are tons of other similar shirts (in terms of disrespecting religions) in the Lebanese Market that no one has discovered yet. If we were to point out all the items and products that are disrespectful to religions in the market, we will need to come up with a special ministry for that. 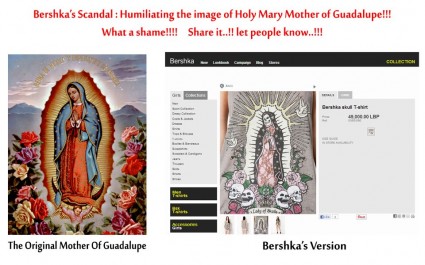 What may seem as fashionable to a group of people in a certain country can be offensive to another group in another country, so those who are bothered with this shirt can report it to the authorities who will be more than glad to ban it, or even file a complaint to Bershka or Azadea Group.

On a last note and after seeing MTV’s report on that shirt, I am not sure how anyone can monitor all the clothes coming to Lebanon and see which one is disrespectful to religions and which is not. The only way to do that is ban everything like Karl suggests in his post.