Lebanese tried convincing Arab tourists last week in Tripoli that the security situation is good through Kamikaze Arguile-Delivery displays but that didn’t stop Qatar & UAE from asking their citizens to leave Lebanon.

It appears that the Arabs knew something we didn’t know and the result was a bloody day that started in Halba, then extended to Akkar and Tripoli and later on to Beirut and Saida. I don’t even want to know who’s wrong or right because I’ve lost hope in all parties in Lebanon but what pisses me off every time is the burning of tires as a sign of protest.

If you wish to protest for any reason, why the hell do you wanna pollute your country and asphyxiate everyone? Form human chains to block roads, park your cars or put garbage cans or cement blocks for all I care but stop burning tires!

I asked around what’s the alternative to burning tires and the best answers I got were calories and fat, or maybe even “politicians” lol! Speaking of calories, it would have been much better if Akkar and Tripoli residents participated in yesterday’s planned Mini-Marathon in Tripoli and eased the tensions a bit instead of organizing rallies, blocking roads, shooting at each other and of course burning tires. 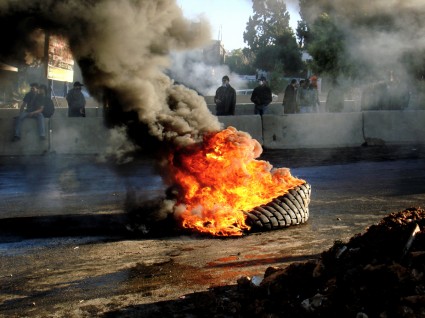