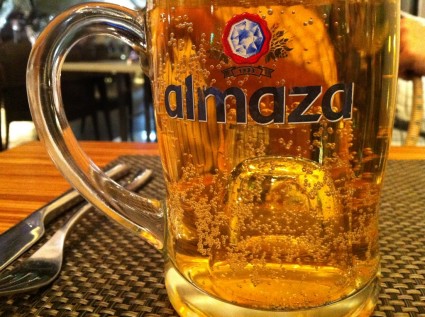 Picture taken by myself [LeNajib]

According to CNN Travel, Almaza is the No.1 beer in the Middle East and North Africa. Almaza is indeed great but now I am interested in tasting the other 5 beers on that list. I don’t think we have any of them in Lebanon though (Definitely not the Israeli one haha!).

In at number one is the king of Middle Eastern beers and the staple of any trip to Beirut, the one-and-only Almaza. At a low 4% ABV, Almaza may be a light and fairly standard pilsner, but served ice cold at a Hamra Street café on a warm summer evening, it amounts to far more than that.

“Almaza tastes like a Lebanese summer night would if you could bottle it, with a side of nuts,” said Beirut native Karl Baz, 33. [CNN]