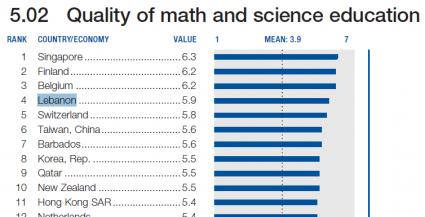 I posted almost a week ago on how Lebanon was ranked in the top 5 countries of the World for Maths and Science education and in the top 10 for Quality of the Educational System according to the World Economic Forum’s 2013 Global Information Technology Report.

For some reason, this piece of news got everyone’s attention and spread online like crazy. I have to admit I didn’t think it was that appealing as we ranked relatively bad in almost every other category so I didn’t bother go through the 300+ pages report and the methodology behind it to understand how those rankings were drawn out (even though one of the comments on the original post suggested something was wrong with the rankings).

Mouhammed Soueidane says:
I’m sorry to break it down to you, but make sure to check this link:
http://www3.weforum.org/docs/WEF_GITR_Report_2013.pdf

Go to page 325(349 in the PDF file). The above graph was made based on a question that was asked to the Lebanese people. The question is:
How would you assess the quality of math and science education in your country’s schools?

The above results are merely what the Lebanese people think about concerning the “Quality of math and science education” in their schools.

Fortunately though, The Beirut Spring shared today a post by Mohammad Alloush, a guest economist, who examined the report thoroughly and provided a proper explanation to the rankings proposed as well as the Real Position of Lebanon’s Education System. Check it out [Here].

When it comes to secondary enrollment rates and primary completion we come at a whopping 87th place. Over 10% of children drop out of primary school, and this number is much higher in poor public schools. In adult literacy, we rank 88th. In tertiary enrollment rates, we rank 40th without saying much about the quality. In a UNESCO education index that takes many different aspects of the system into account, in 2010, our ranking was 70. We were 97th in 2007.

In an international quality of education test (TIMSS 2011), students in Lebanon got an average score of 449 on math which is 51 points below average. In terms of ranking, we came in 25th place out of 43 participating countries. Better still, in terms of achieving certain benchmarks, only 1% of Lebanese students achieved the advanced benchmark (3% is the world median), 9%, 38%, & 73% achieved the high, intermediate, and low benchmarks respectively. The world medians are 17%, 46%, and 75%. In terms of quality, we are clearly below average.

I don’t mean to berate nameless people on this. But if we don’t realize that something is wrong, then we have no incentive to fix it. [BeirutSpring]