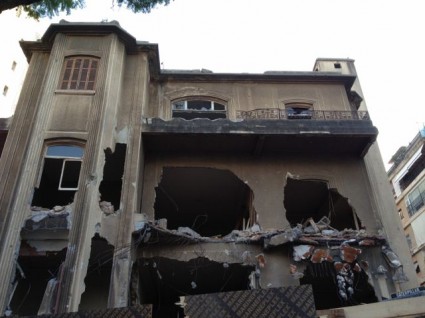 Picture from The Beirut Report

The decision was taken almost two months ago yet the demolition works only started today and so far are going quickly. By tomorrow, the residence of Amine Maalouf, the author of The Rock of Tanios and the first Lebanese to enter “l’Academie Francaise”, will cease to exist.

As I stated previously, I have nothing against building new skyscrapers and modern buildings, but the way this case has been handled is quite shameful and suspicious to say the least. According to Al-Akhbar, Culture Minister Gaby Layoun had issued an official paper back in June 2012 forbidding the demolition of Maalouf’s residence and asking to preserve it, only to change his own statement few months later by claiming that the house is worthless and approving his destruction. How is that possible and what made the minister change his statement? Isn’t that worthy investigating?

Either ways, if you are wondering why Amine Maalouf is still in France and has no plans to come back to Lebanon, I believe this is more than a good enough reason for him to stay out.

You can read both statements [Here].