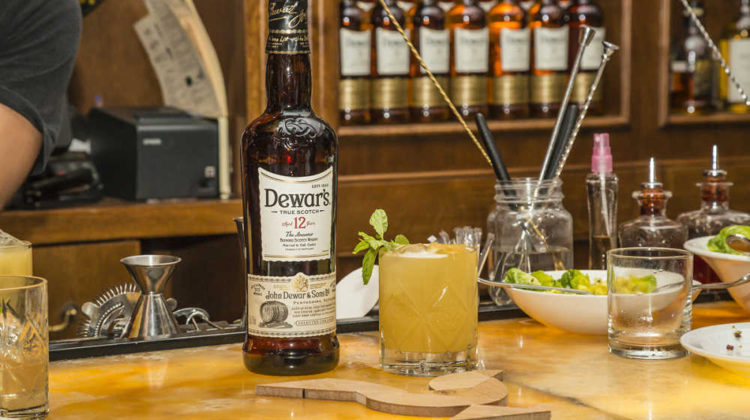 Dewar’s just kicked off the second edition of their #LiveTrueLebanon campaign. The campaign aims to highlight local creative talents who have transformed their dreams into reality by following their heart and often going against the current. This campaign comes after an exciting campaign that I’ve followed up on throughout the summer: the Scotch Egg Club. Here’s my take on these two great campaigns in Lebanon. 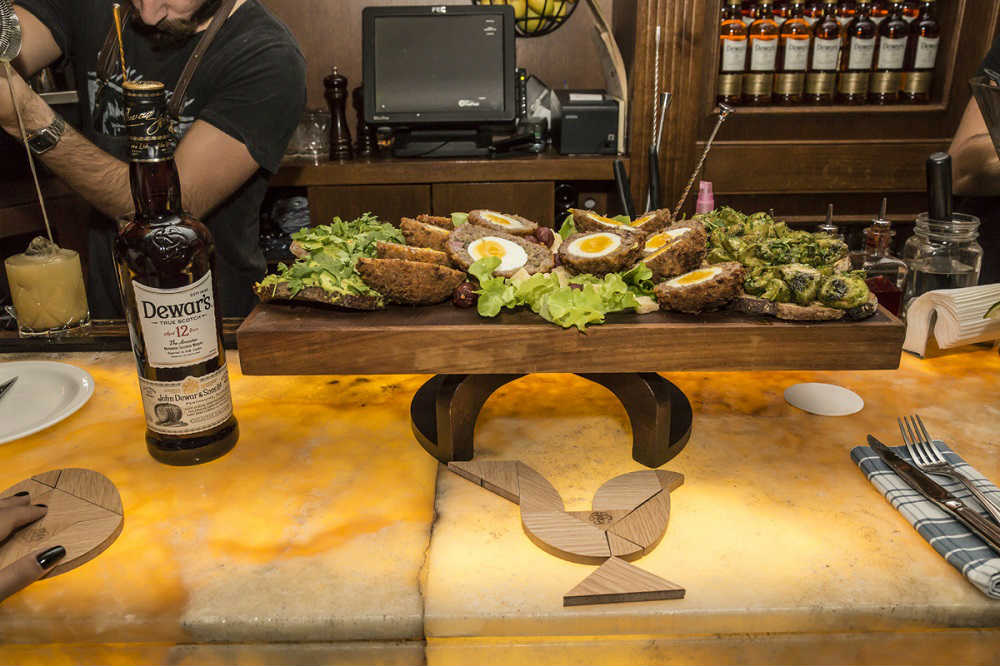 What is the Scotch Egg Club?

Back in July, Dewar’s launched the Scotch Egg Club in Lebanon. The concept was created by John Dewars’ very own son Tommy Dewars. The latter was well-known for having a thing for both good Scotch and chickens. He wasn’t eating those chickens though, but keeping and taking care of them. His obsession with both led him to create the unlikely but perfect combination of delicious scotch-based cocktails and egg-based meals. Keeping true to that tradition, Scotch Egg Club events feature specially created cocktails paired with dishes that would make Dewars senior proud. 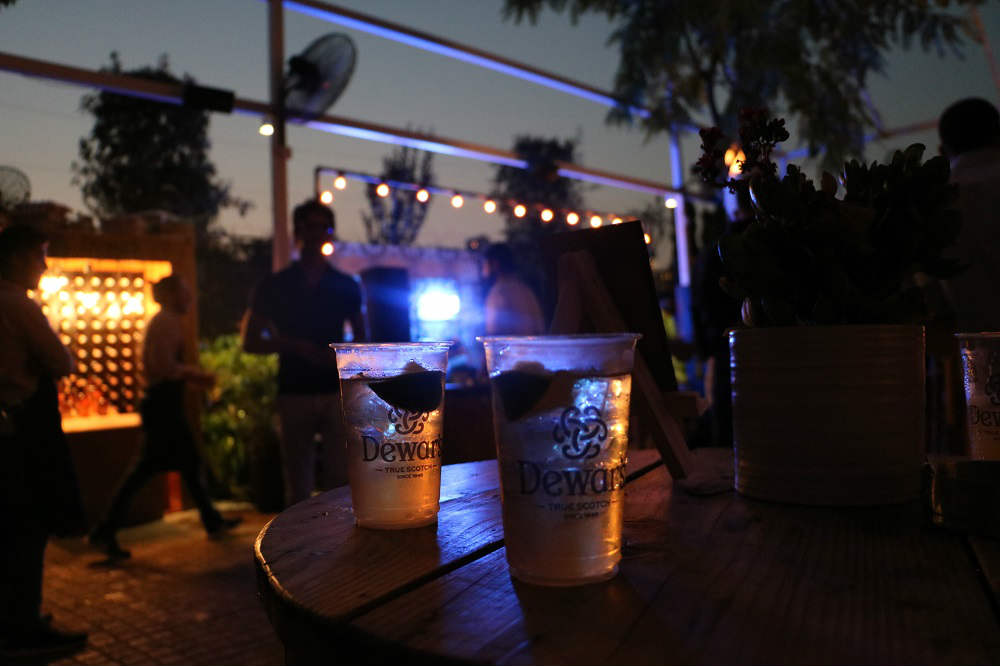 When you get invited to a meal that is basically an odd mix of eggs and whiskey, you’re not really sure what to expect. I have to say I wasn’t very fond of the idea at first but my first Scotch Egg Club experience made me change my mind and I ended up attending most of their events and gaining a couple of kilos…

They started off at Fattal Group headquarters with a big launch then went on to organize several other events where invitees would gather to enjoy creative combinations of food and cocktails. The Scotch Egg club was held at several locations during the past five months including the Happy Prince in Mar Mikhael, Garden State in Sin el Fil, and the closing night at Cherry on the Top in the heart of Beirut. 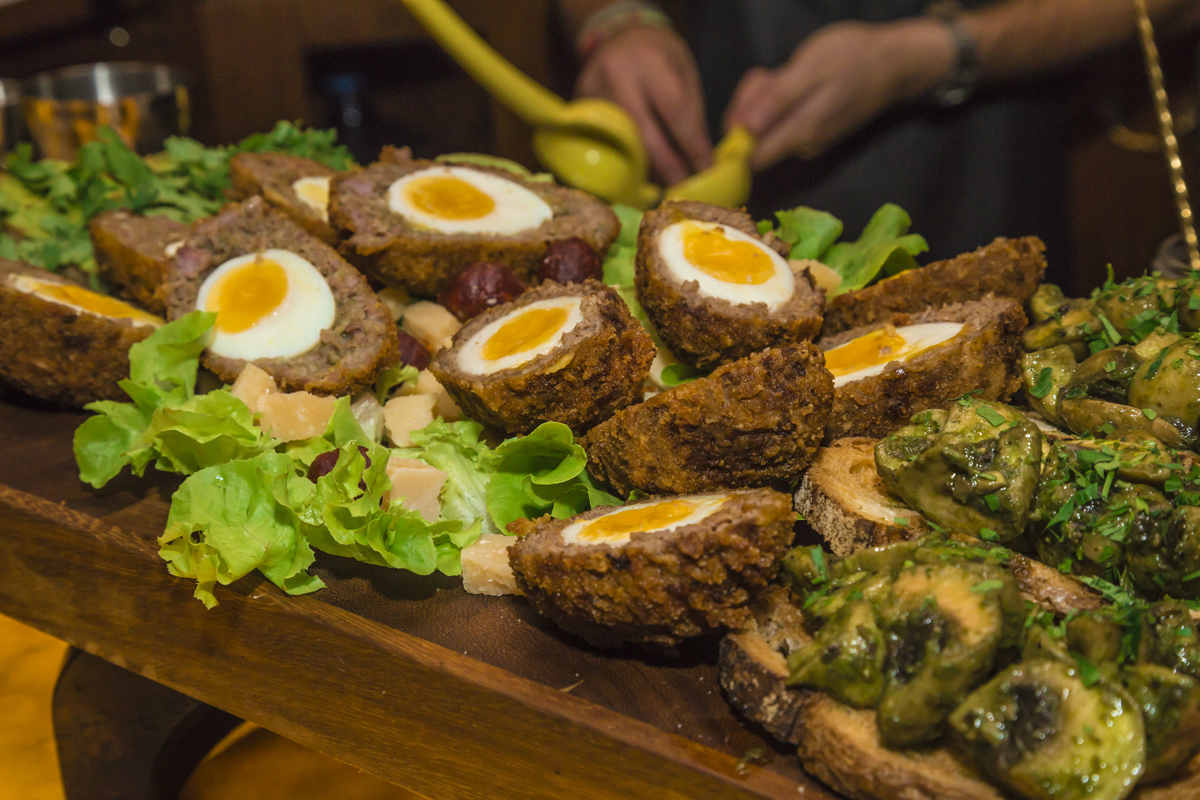 The funnest one was at Happy Prince as it was an exclusive Scotch Egg Club where we were treated to an exquisite culinary experience that prived to be winning meal combination of delicious scotch-based drinks paired with specially created egg-centric meals (pun intended).

The event took place at The Happy Prince in Mar Mikhael, with a set menu for the evening that included the following drinks: The Jewish, Julien Lepers, Mamie Taylor, Penicillin. Each of these drinks is made from a base of Dewars’ finest scotch with different mixers including local arak. The food menu consisted of a BLT salad, Kissproof Scotch egg, Happy Prince Scotch Egg, Shepard’s pie and French toast & sunny side eggs up for dessert. 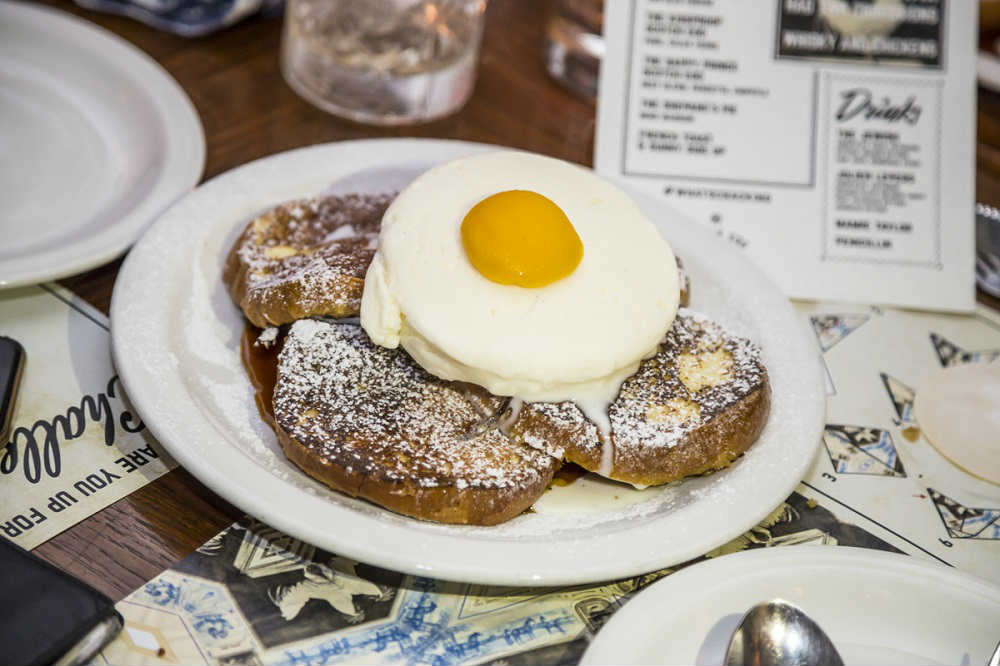 When the plates and drinks started coming our way, we found ourselves enjoying every bite and sip. The menu was a success as far as I could tell, and I was glad to be among the first to sample it. Each dish made the participants eager to try the next one, and wash it down with a new cocktail recipe.

Apart from the edible part of the evening, brain teasers made the evening a bit more fun as I attempted to create a chicken shape with my plate cover with the instructions given, as well as wooden blocks you could puzzle into different shapes while you wait for the next dish and cocktail. 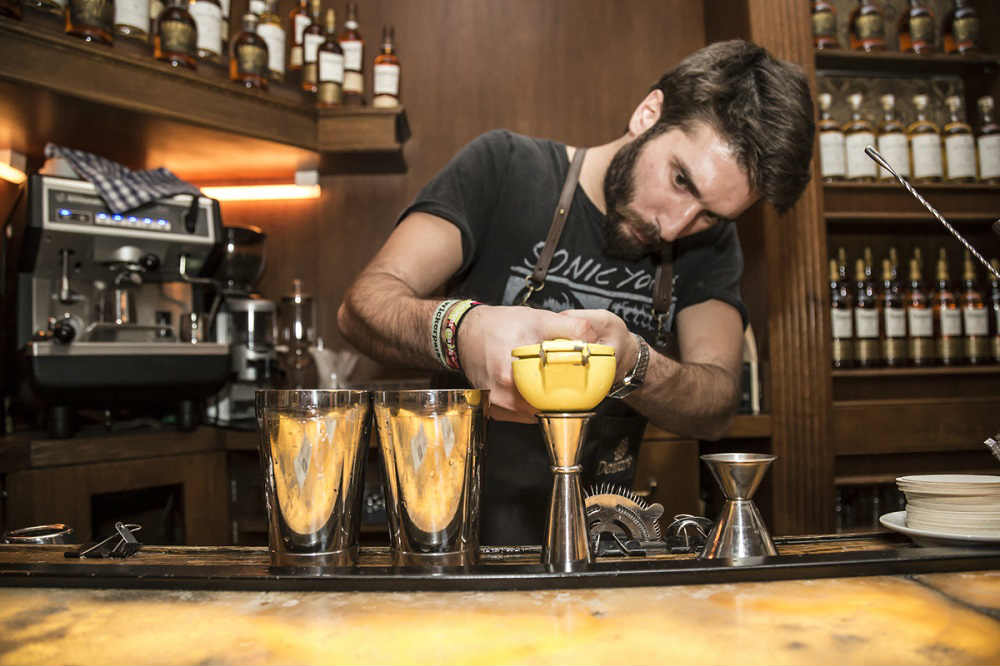 The items showcased that night have all been added to the Happy Prince menu if you’d like to try them sometimes too!

The Live True campaign is in its second year now, and the campaign aims to shed light on passionate, young Lebanese people who embody the spirit that Dewar’s Scotch Whisky has always supported and identified with. Through their untold stories, they capture the essence of the artists and their journeys to their current success. This year’s two ambassadors are Who Killed Bruce Lee the band (WKBL) and a rising Lebanese chef Tara Khattar.

With the commercials being aired on TV right now and the billboards plastered all over Beirut, this year’s ambassadors need no introduction! For those of you who aren’t familiar enough with them though, here are my thoughts on them: 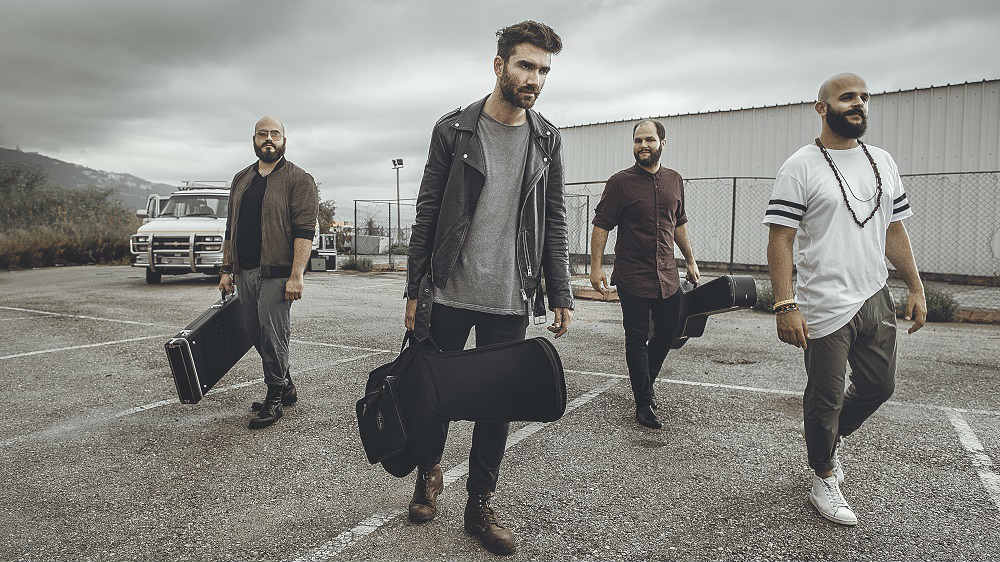 WKBL are a Lebanese band currently on tour all over Europe, rocking dozens of concerts and festivals across Germany, France, Switzerland and many other European countries. Personally, I am good friends with the boys and have been a huge fan since day one. Their rise to success started when all four of them quit their day jobs, sold all their possessions and embarked on their journey across Europe. It was never about leaving Lebanon though, and WKBL make it a point to always come back home and release their new albums with the fans that have been loyal to them from the start. Taking such a risk, with no guarantees except their passion for their music, is what makes WKBL live true every day they are on tour making crowds go wild or in the studio churning out their next crowd-pleaser. 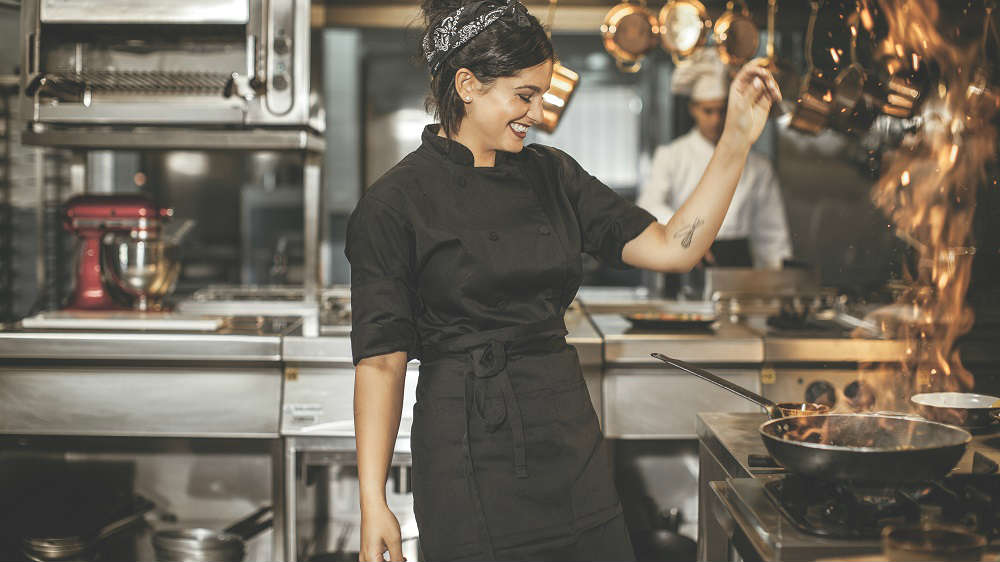 Tara Khattar is the other ambassador for this year’s campaign. The New York based chef admits that it was not her who chose cooking, but cooking that chose her. She only felt truly at home when cooking and preparing her feelings and life experiences onto a plate. Despite being deterred by many saying cooking is “just a hobby”, Tara stayed true to her passion and has been met with meteoric success in what she is passionate about. Today, she is one of the top food consultants and caterers in New York, with a star-studded roster of clients and brands seeking her advice and guidance in all matters food-related.

WKBL and Tarak Khattar are examples of folks who chose the less-trodden path and never gave up on it despite the insurmountable obstacles that dotted their way. It is a unique kind of freedom to be able to forge your own path doing what you love and are passionate about, and finding success after a tough and winding journey. They embody Charles Bukowski’s timeless words when he said: “If it doesn’t come bursting out of you in spite of everything, don’t do it.”