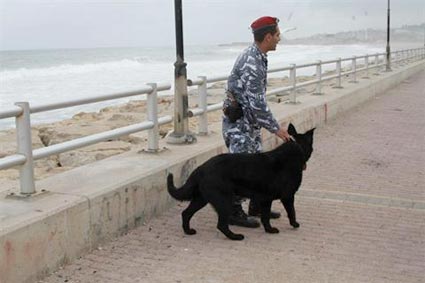 A dog roaming the Corniche of the coastal city of Sidon for nearly an hour frightened bystanders early Thursday morning before a policeman subdued the animal and took it away.

Sidon Municipality Police arrived at the scene and were about to sedate the animal using a stun gun. However, a policeman from the Internal Security Forces who is a longtime pet owner was able to calm the dog without using force and put a chain leash on it.

Hard to believe no one tried to shoot it or run it over. Even the cops were planning to use a stun gun and not real bullets. I’m impressed. [Link]